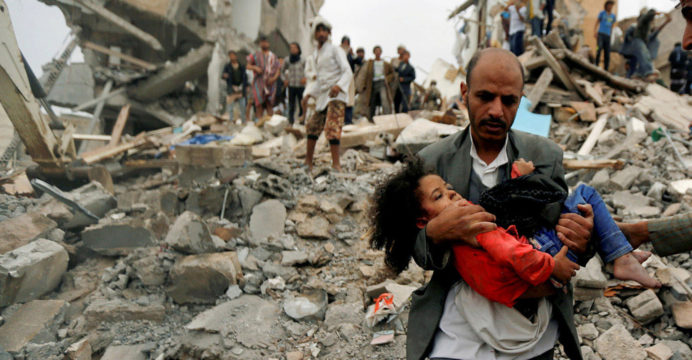 President Joe Biden on Thursday ended US support for Saudi Arabia’s devastating war in Yemen and dramatically increased the welcome to refugees, ushering in a major reset in American foreign policy.

In his first major speech on foreign affairs as president, Biden also froze former president Donald Trump’s plans to redeploy troops from Germany and vowed a tough approach against what he described as a rising authoritarian threat from China and Russia.

Two weeks into their term, Biden and Vice President Kamala Harris traveled together to the State Department in a symbol of a renewed focus on diplomacy after Trump’s tumultuous four years.

“America is back. Diplomacy is back,” Biden told a socially distanced auditorium of diplomats.

In a speech shortly afterward in the ornate Benjamin Franklin room, Biden said the United States would end all support including connected arms sales for ally Saudi Arabia’s war in Yemen, which he said “has created a humanitarian and strategic catastrophe.”

He appointed a US special envoy for Yemen, veteran diplomat Timothy Lenderking, who Biden said would support UN efforts to reach a ceasefire and revive peace talks between the government and Huthi rebels who control much of the country including the capital Sanaa.