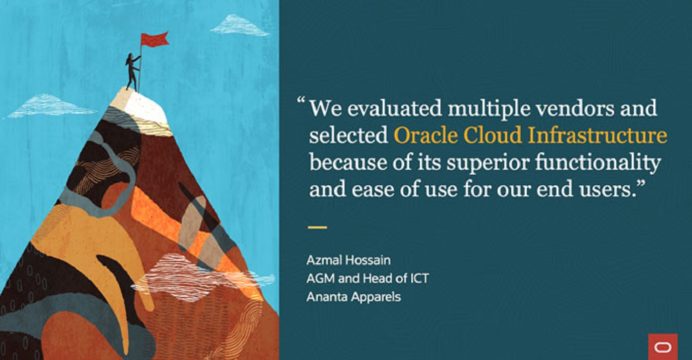 Ananta Apparels, part of $300 million Bangladesh-based conglomerate Ananta Group, has selected Oracle Cloud to help it gain real time visibility into its operations.  The company is one of the leading garment manufacturers and exporters in Bangladesh, producing more than 1 million private label garments per month for some of the leading brands and retailers in the world, including Gap, H&M, OshKosh and JCPenney.

Since moving to Oracle Cloud Infrastructure (OCI), Ananta Apparels has reduced the financial overhead of managing an in-house data center by almost 40-50 percent. In addition, OCI has significantly improved the availability and reliability of Ananta Apparel’s IT infrastructure and reduced the total number of complaints from their external buyers and internal user dropped by almost 50 percent. The company is now able to spend an additional 20 hours every week bringing innovation to its products and services, which were earlier being spent on addressing complaints.

“We evaluated multiple vendors and selected Oracle Cloud Infrastructure because of its superior functionality and ease of use for our end users. In addition, the freedom to pay per use, the flexibility to customize, and the high security of OCI enable us to rapidly scale, at a very low total cost of ownership”. Said Azmal Hossain, Assistant General Manager and Head of ICT, Ananta Apparels.

Additionally, key to Oracle’s selection against other options was the superior functionality offered, and the freedom to pay per use, the flexibility and ease to move customized applications using automated tools, and the high levels of security Oracle Cloud offered enabled the company to rapidly scale, at a very low total cost of ownership.

“Specifically architected to meet the needs of the enterprise, Oracle Cloud is a second-generation enterprise cloud that delivers unmatched security, performance, and cost savings and includes access to Oracle’s autonomous services and built-in security,” said Maria Dzhanan, Vice President, Oracle Digital, JAPAC. “Those organizations, like Ananta Apparels, that opt to move to the cloud through migrating their existing software investments to Oracle Cloud Infrastructure, are reaping rewards of their deployment and gaining the scalability and performance needed for their current and future needs.”