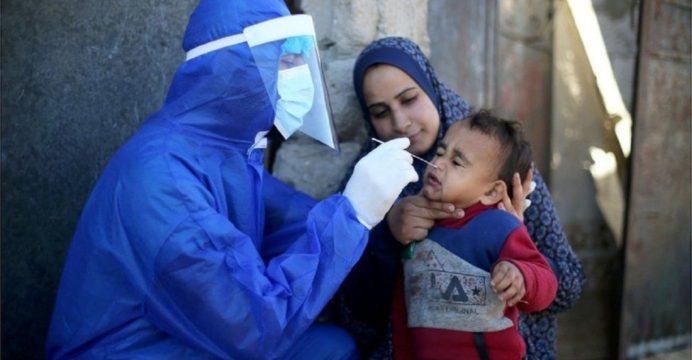 Israel has one of the most advanced vaccination programmes in the world but Palestinians in the occupied West Bank and Gaza have yet to see one, reports BBC.

Israel says that is not part of agreed protocols and it has not received any requests from the Palestinians. This is its first such transfer.

Israel has recorded some 640,000 Covid cases since the pandemic began, and just over 4,700 deaths, Johns Hopkins University research shows. There have been almost 160,000 cases in the West Bank and Gaza, with 1,833 deaths, the research shows.

Israel’s special deal with vaccine supplier Pfizer – Israel is providing vital medical data in return for a quick rollout – has helped it to become the country that has inoculated more people per head of population than any other.

Some 1.7 million people, almost 20% of the population, have already received both doses. More than three million people have received the first. However, the country remains under lockdown.

The office of Israeli Defence Minister Benny Gantz confirmed on Sunday that Israel would make the transfer to the Palestinian Authority. The Palestinians have not yet commented.

WHAT IS THE SITUATION IN THE TERRITORIES?

Neither the West Bank, whose limited self-rule is run by the Palestinian Authority, nor Gaza, controlled by militant Islamist movement Hamas, has started vaccination programmes.

Palestinian health officials say deals are being negotiated for vaccine supplies but it is unclear when they will start.

The territories also hope to benefit from the World Health Organization-backed Covax scheme, to supply vaccines to poorer states and nations, but again timings are unknown.

A few thousand Russian-made vaccines have arrived but is unclear who they have gone to.

About 2.7 million Palestinians live in the West Bank, and another 1.8 million in Gaza.

WHOSE RESPONSIBILITY IS IT TO VACCINATE PALESTINIANS?

Israel points to the Oslo accords, agreed in 1993 and 1995, which set out how parts of the West Bank and Gaza would be governed under an interim framework until a permanent peace settlement can be reached.

It says these give the Palestinian Authority oversight of public health under the principles of self-determination. The Palestinians say those accords also say Israel should co-operate in combating epidemics and contagious diseases.

UN experts say the Geneva Convention on occupied territories takes priority over these accords and it is Israel’s responsibility to provide equitable access to vaccines for Palestinians in Gaza and the West Bank.

But international law experts disagree on this and on many other issues surrounding the occupied territories.

On Friday the WHO warned against “vaccine nationalism”, saying there was a “real danger that the very tools that could help to end the pandemic – vaccines – may exacerbate” global inequality.