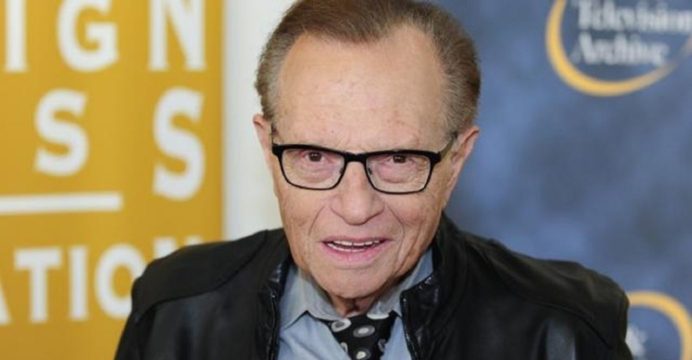 American talk show legend Larry King has passed away. He was 87.

He died today at Cedars-Sinai Medical Centre in Los Angeles after losing his fight with coronavirus.

A statement posted online by his Ora Media company confirmed his death.

It read: “With profound sadness, Ora Media announces the sad death of our co-founder, host and friend Larry King.

“For 63 years and across the platforms of radio, television and digital media, Larry’s may thousands of interviews, awards and global acclaim stand as a testament to his unique and lasting talent as a broadcaster.

“Additionally, while it was his name appearing in the shows’ titles, Larry always viewed his interview subjects as the true stars of his programs, and himself as merely an unbiased conduit between the guest and audience.

“Whether he was interviewing a U.S. president, foreign leader, celebrity, scandal-ridden personage or an everyman, Larry liked to ask short, direct, uncomplicated questions.

“He believed concise questions usually provided the best answers, and he was not wrong in that belief…

“Ora Media sends our condolences to his surviving children.”

Larry was admitted to hospital in Los Angeles this month after contracting Covid-19. His death comes after years of health problems that plagued the star over the years including battles with lung and prostate cancer, reports Mirror.

He also had heart attack in 1987, which he survived and he also had a near-fatal stroke 2 years ago, that had left him in a coma for weeks.

Larry was born Lawrence Zeiger in New York and started his profession as a journalist after relocating to Florida.

He started off in radio, landing his first on air presenting gig in 1957 and going on to take his new name of Larry King on the advice of his station manager. He legally changed his name in 1959.

After spending years naming a name for himself in radio, he went into Television 61 years ago to host a local news show named Miami Undercover.

His career suffered a blip 50 years ago while he was arrested after being accused of riping off a business associate. He lost his radio and TV job and ended up working as a racing announcer. However, Larry managed to come back into television in 1975 later and by 1978 he’d began his own national radio show.

He kept the radio show going while also working in Television. In 1985, he started Larry King Live on CNN which took him to a new level of fame.

He married for the last time in 1997 to Shawn Southwick. Their relationship collapsed in 2010 and they reconciled but filed for divorce again in 2019.