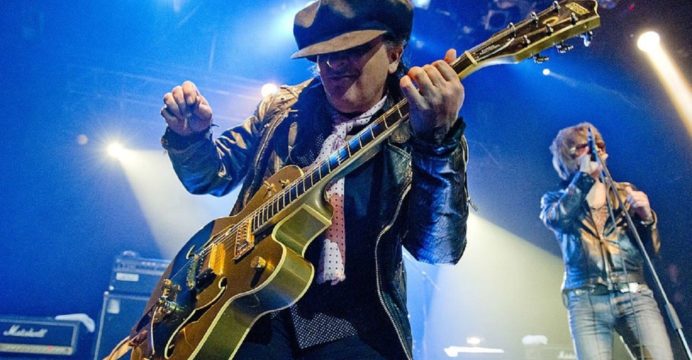 One of the group’s founding members, his visceral riffs bridged the divide between punk and glam, and helped kick-start the punk and new wave movements, reports BBC.

“As most of you know, Sylvain battled cancer for the past two and 1/2 years,” his wife, Wanda O’Kelley Mizrahi, wrote in a statement on his Facebook page.

“Though he fought it valiantly, yesterday he passed away.”

She added: “While we grieve his loss, we know that he is finally at peace and out of pain. Please crank up his music, light a candle, say a prayer and let’s send this beautiful doll on his way.”

Sylvain’s death leaves only one surviving member of the New York Dolls’ original line-up from their 1973 debut album, frontman David Johansen. The singer posted his own tribute on Instagram.

“My best friend for so many years, I can still remember the first time I saw him bop into the rehearsal space/bicycle shop with his carpetbag and guitar straight from the plane after having been deported from Amsterdam, I instantly loved him,” he wrote.

Born Sylvain Mizrahi in Cairo, Egypt, on Valentine’s Day 1951, the musician lived in France as a child before moving to New York with his family.

Like the punk movement they helped inspire, the band wanted to shake up the self-indulgent state of 70s rock.

“The reason why the Dolls got together was because of the boredom with the norm of the day, which was like the stadium-rock era,” Sylvain told Brooklyn Vegan in 2006. “The 20-minute drum solos, songs that were a big operetta. They were sort of boring, they’d lost their sex appeal.”

The Dolls cut through with urgent, punchy songs about sex, drugs, alienation and dysfunction.

The band’s provocative and vulgar live shows gained them a huge following in New York, but many record labels were reluctant to sign them. That situation not helped by their androgynous look – shocking at the time – with their wardrobe sourced from cheap women’s clothing stores on New York’s Lower East Side.