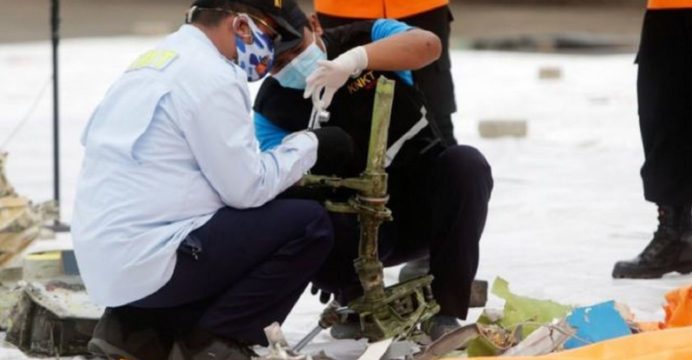 Black boxes of a passenger plane which crashed in the sea soon after take-off from Jakarta, Indonesia on Saturday have been located, officials say.

A small flotilla of ships has been searching the site and navy divers are expected to be able to retrieve the two flight recorders, they add.

Aircraft parts and human remains have been found, reports BBC.

The Sriwijaya Air Boeing 737 was carrying 62 people when it vanished from radar on its journey to Borneo.

“We have located the position of the black boxes, both of them,” said Soerjanto Tjahjono, head of Indonesia’s transport safety committee, quoted by AFP, several hours ago.

“Divers will start looking for them now and hopefully it won’t be long before we get them.”

Investigators are analysing items which they believe to be a wheel and part of the plane’s fuselage.

BBC South-East Asia correspondent Jonathan Head says the sea in this part of Indonesia is relatively shallow and the bad weather which had been hampering rescue operations has now improved, making it more likely significant parts can be recovered.

However, the search appears to offer no hope of finding any survivors.

A spokesman for the Jakarta police, Yusri Yunus, said two bags had been received from the search and rescue agency.

Police are asking families of the victims to provide DNA samples and dental records to help identify the remains.

Search and rescue efforts have been going on since early Sunday. Four planes were also deployed to help with the search.

It will continue into Sunday night but only with boats using sonar scans, Reuters news agency reported.

The missing aircraft is not a 737 Max, the Boeing model that was grounded from March 2019 until last December following two deadly crashes.