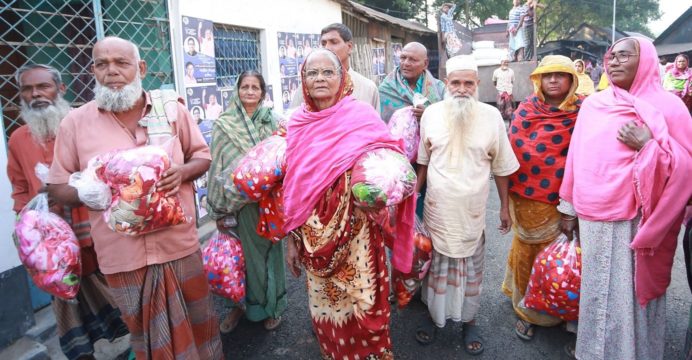 Huawei Technologies (Bangladesh) Limited has distributed 4,000 blankets through Polli Sree Unnayan Sangstha to older people in need who have been severely affected by the cold in Singra, Natore. The groundwork for an effective and successful distribution was being done for last few days. And, an informal handover ceremony has been organized in Dhaka recently.

Zunaid Ahmed Palak, Minister of State, ICT Division, People’s Republic of Bangladesh, who has always paid close attention to the older people in the community joined that event as the Chief Guest. On this occasion, Zunaid Ahmed Palak said, “We have been by the side of the people all the time serving them. Winter has come. Winter in rural Bangladesh is very different than urban cities like Dhaka. It can be quite harsh and relentless for the underprivileged people in rural areas, especially the elderly, as they don’t have adequate resources to tackle the cold. Thus, I am delighted that Huawei Bangladesh realized the fact and took the combined initiative to support the elderly population by giving them blankets during the harsh winter. Thanks to Huawei’s efforts for not only developing Bangladesh ICT but also taking care of the community.”

Zhang Zhengjun, CEO, Huawei Technologies (Bangladesh) Limited, added, “As a localized global ICT solution provider in Bangladesh, Huawei has grown in Bangladesh for 21 years. Besides helping Bangladesh to embrace digitalization, we would also like to stand alongside people through several initiatives in different circumstances. The winter has just started, and it will become increasingly strident here. Last few years, I have witnessed their sufferings during this period of the year. Thus, the blankets distribution are the symbol of our heartfelt gesture to them.”

“We observe the sufferings, miseries, and distresses of people from very close. Therefore, we continuously and dedicatedly work for them. We value the smiles on the poverty-stricken people’s faces, and it means a lot to us. We are grateful to Huawei as they have stood beside the people in need like us.” stated, Subrata Kumar, General Secretary, Polli Sree Unnayan Sangstha.

Over the last few years, Huawei has been distributing reliefs under the initiative of ‘Huawei Bangladesh’s Senior Care Activities 2020.’