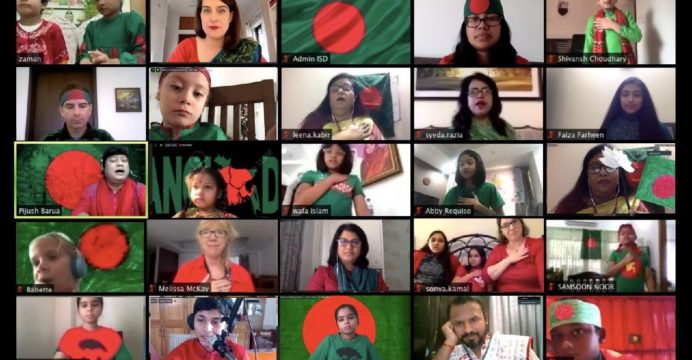 To celebrate the 50th Victory Day of Bangladesh during this unusual time, International School Dhaka (ISD) has conducted an online assembly with students, parents, faculty, and staff members. The assembly was arranged to pay homage to the martyr who laid down their lives for an independent Bangladesh during the Liberation War.

The assembly was hosted by Faiza Farheen, a student from Grade 11. At the beginning of the assembly, the national anthem of Bangladesh was sung by faculty Pijush Barua. The national anthem was followed by an opening message from Kurt Nordness, Director, and a brief history session by Zeeshan Zakaria, Faculty.

Two songs were performed during the assembly by Shadman Al Samit from Grade 9 and Sehrish Azad from KG, respectively. Idan Hossain from Grade 11 has also played the instrumental of Ekti Bangladesh.

Finally, a group screenshot was taken as everyone was wearing red and green to commemorate the theme of Victory Day.

On this occasion, Kurt Nordness, Director, International School Dhaka, said, “Today, we remember the courageous sons and daughters of Bangladesh whose sacrifice brought this gift of nationhood to a proud people with ancient cultural heritage. Those brave patriots achieved their dreams. Let today be a reminder to follow and fulfill our dreams—for Bangladesh, for our school community, and for us and our families. In this way, we will also make the world a better place for everyone.”