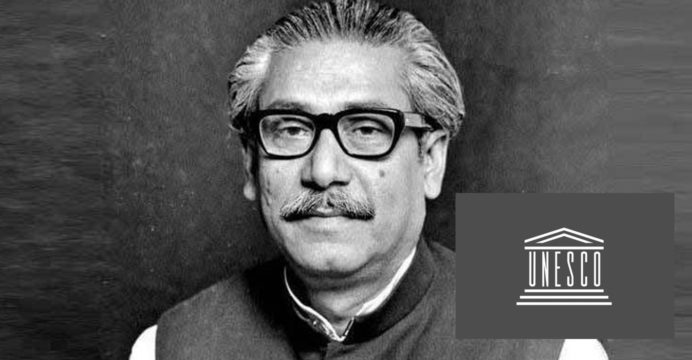 The UNESCO has decided to introduce the “UNESCO-Bangladesh Bangabandhu Sheikh Mujibur Rahman International Prize in the field of Creative Economy” for rewarding global economic initiatives of youths, reports BSS.

“This is the first time any line organization of the United Nations decided to launch award after the name of Father of the Nation Bangabandhu Sheikh Mujibur Rahman,” foreign minister Dr A K Abdul Momen told reporters at his office today.

The UNESCO Executive Board has unanimously adopted the proposal at its 210th meeting held on Friday, Dr Momen said.

Mentioning that currently, UNESCO is running 23 awards after names of different eminent global personalities or organizations, the foreign minister said, adding this is the first time UNESCO has decided to introduce an award after the name of someone from Bangladesh who is respected by all.

“We do believe this award will create an opportunity to spread the ideology of Bangabandhu across the world and inspire global cultural workers in a flourishing creative economy,” he said.

Dr Momen hoped that this award will play a vital role in building Bangladesh’s image in the world. “The name of the prize reflects that Bangladesh and Bangabandhu is one and inseparable,” he added.

The UNESCO will award the prize worth the US $50,000 every two years while it will be first handed over at the 41st UNESCO’s general meeting to be held in November next year, the minister said.

The decision came as Bangladesh is celebrating the birth centenary of Father of the Nation Bangabandhu Sheikh Mujibur Rahman through yearlong programs while UNESCO declared 2021 as ‘International Year of Creative Economy for Sustainable Development’.

“UNESCO has directly involved itself in the Bangabandhu’s birth centenary celebration by declaring the prize during the ongoing Mujib Barsha,” he said.

The foreign minister thanked all the member satiates of the UNESCO executive board and its director-general Audrey Azoulay for taking the decision.

The UNESCO-Bangladesh Bangabandhu Sheikh Mujibur Rahman International Prize for the Creative Economy will create a knowledge-sharing mechanism by capturing, celebrating, and communicating best practices in the development of creative entrepreneurship, according to a UNESCO document.