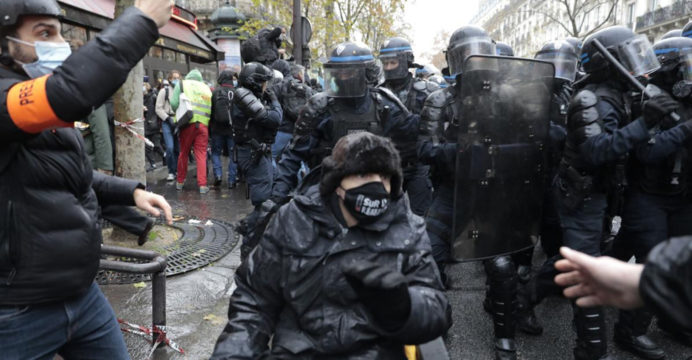 More than 150 detained from a protest against Macron in French

The streets of Paris are once again buzzing. Protests erupted on Saturday (December 12th) in protest of the law’s plan to ban publishing pictures of police at work. Thousands of French people took part in it.

Large numbers of security forces were deployed to avoid any disturbance. Protesters continued to march around various roads. At one stage, when the police tried to disperse them, clashes broke out. Several protesters were also injured. Many protesters were detained. In response, protesters hurled brickbats at police and set fire to motorcycles.

Protesters say, “The government wants to implement this law, we don’t want that. It is a threat to democratic freedom. This law will further increase the power of the police.”

Another said, “We condemn this systematic police violence. This law will increase police repression. We can’t let that happen.”

The protesters did not leave the highway even during the day and night. The scuffle between police and protesters are. Police fired water cannons to disperse them. Over one and a half for their alleged involvement in violence from different detained protesters.