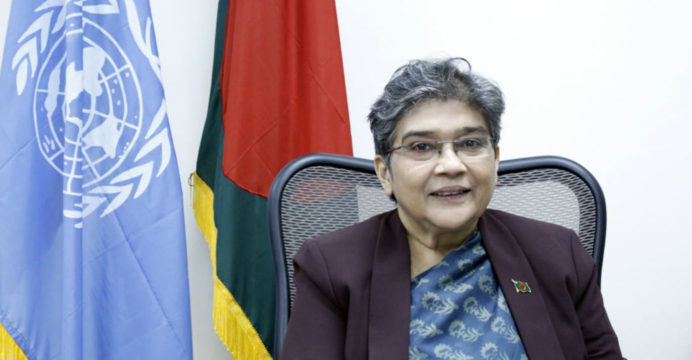 Bangladesh’s Permanent Representative (PR) to the United Nations (UN) Ambassador Rabab Fatima was elected as the Vice President (VP) of the UNDP/UNFPA/UNOPS Executive Board on Monday, reports BSS.

This selection of Rabab Fatima will allow Bangladesh to work closely with the other board members and the leadership of these three vital UN organs and provide them strategic guidance to their work.

The Ambassador of Bulgaria was elected as the President of the Board while the other Vice-Presidents are Ambassadors of the Netherlands and Gambia.

In her address at the first meeting of the newly elected Executive Board, Ambassador Fatima thanked the Board members for their support and keep confidence in Bangladesh’s ability to contribute to the work of these important UN agencies.

She assured them of her delegation’s full support for their work, especially now in their efforts to build back better from the COVID-19 pandemic.

This election comes as a demonstration of the trust and confidence that Bangladesh enjoys due to her strong legacy of working together with the UN entities and their Executive Boards for implementation of the global development agenda under the leadership of Prime Minister Sheikh Hasina, she said.

Ambassador Fatima is also serving as the President of the UNICEF Executive Board this year.

The UNDP, UNFPA and UNOPS have specific mandates to advance UN’s development agenda in the field level.