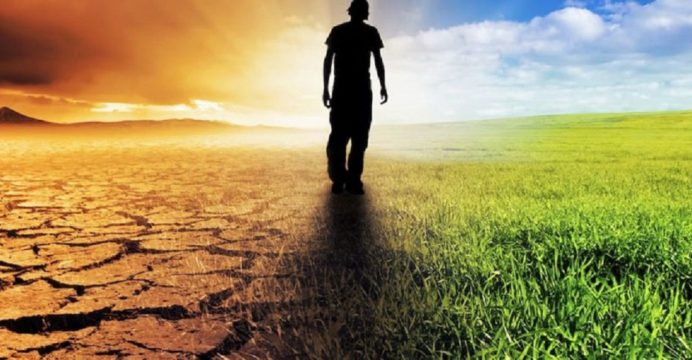 No country immune from the health harms of climate change

No country – whether rich or poor – is immune from the health impacts of worsening climate change. Unless urgent action is taken, climate change will increasingly threaten global health, disrupt lives and livelihoods, and overwhelm healthcare systems, according to the 2020 Report of the Lancet Countdown on Health and Climate Change, published in The Lancet.

The authors say that the recovery from the COVID-19 pandemic offers a key moment to act on climate change. Together, a joint response to converging crises offers the chance to improve public health, create a sustainable economy, and protect the environment.

“The pandemic has shown us that when health is threatened on a global scale, our economies and ways of life can come to a standstill,” says Dr Ian Hamilton, executive director of the Lancet Countdown.

“The threats to human health are multiplying and intensifying due to climate change, and unless we change course our healthcare systems are at risk of being overwhelmed in the future. This year’s devastating US wildfires and tropical storms in the Caribbean and Pacific, coinciding with the pandemic, have tragically illustrated that the world doesn’t have the luxury of dealing with one crisis at a time.”

New evidence from the Lancet Countdown report shows that the last two decades have seen a 54% increase in heat-related deaths in older people, with a record 2.9 billion additional days of heatwave exposure affecting over-65s in 2019 – almost twice the previous high.

However, the 120 world-leading health and climate change academics and clinicians behind the new report say that if we take urgent action to tackle climate change – by implementing plans to deliver commitments of limiting global temperature increases to well below 2C – we can mitigate these shocks and achieve health and economic benefits instead. At the same time, these actions could reduce the risk of future pandemics, because the drivers of climate change can also drive zoonotic pandemic risk (the risk of pandemics caused by infectious diseases that jump from non-human animals to humans).

The report – a collaboration between experts from more than 35 institutions including the World Health Organisation (WHO), World Meteorological Organisation, and led by University College London – publishes on the 5th anniversary of the Paris Agreement, when the world pledged to limit global warming to well below 2C.

Dr Wenjia Cai, director of the newly-launched Lancet Countdown Regional Centre for Asia, based out of Tsinghua University in Beijing, said: “On the occasion of the 5th anniversary of the Paris Agreement, we must confront the worst outlook for public health our generation has seen. Failure to meet our climate commitments could take some key Sustainable Development Goals out of reach as well as our ability to limit warming.”

From small islands to big cities, climate-related health shocks may arise in the future due to difficulties anticipating the impacts of extreme heat and finding successful ways to adapt.

Impacts of this include growing levels of heat-related mortality among vulnerable people in all parts of the world, with the lives of 296,000 older people claimed in 2018. Livelihoods are at risk too as heat is increasingly affecting people’s ability to work outdoors in developing regions, with significant economic implications. Last year saw a continued loss in productivity, with India accounting for 40% of the total 302 billion work hours lost.

Heat and drought are also driving sharp increases in exposure to wildfires, resulting in burns, heart and lung damage from smoke, and the displacement of communities. Some 128 countries have experienced an increase in population exposure to wildfires since the early 2000s, with the USA seeing one of the largest increases. By the end of the century, meanwhile, the report finds that projected sea level rise could threaten the displacement of up to 565 million people, exposing them to a wide range of health harms.

Professor Hugh Montgomery, Lancet Countdown co-chair and an intensive care doctor, University College London, said: “Climate change drives a cruel wedge which widens existing health inequalities between and within countries. Our report shows that – just as for Covid-19 – older people are particularly vulnerable, and those with a range of pre-existing conditions including asthma and diabetes are at even greater risk.”

New data in the report highlight that healthcare capacity to deal with these future health shocks is still not enough, despite improvements. Only half of countries surveyed have drawn up national health and climate plans, with just four reporting adequate national funding, and less than half of countries have conducted vulnerability and adaptation assessments for health. Meanwhile, two thirds of global cities surveyed expect climate change to seriously compromise public health infrastructure.

Professor Hugh Montgomery added “The COVID-19 pandemic has thrown a spotlight on the current ability of healthcare and wider health systems to cope with the sorts of future health shocks that climate change may generate. Flames, floods and famine do not respect national borders or bank accounts: a nation’s wealth offers no protection against the health impacts of even a 1.2C global average temperature rise.”

A Lancet editorial published alongside the new report highlights that climate change and zoonotic pandemic risk share common drivers, making them inextricably entwined so that they must be handled together. Climate change and its drivers damage the environment through urbanisation, intensive agriculture and unsustainable food systems, air travel and tourism, trade, and lifestyles powered by fossil fuels, in turn creating conditions that encourage zoonoses.

Dr Richard Horton, editor-in-chief of The Lancet, said: “If we wish to reduce the risk of future pandemics, we must prioritise action on the climate crisis – one of the most powerful forces driving zoonoses today. Now is the time for us all to take the environmental determinants of health more seriously – we must address the climate emergency, protect biodiversity, and strengthen the natural systems on which our civilisation depends. This is a moment we cannot afford to ignore. Just as we have seen with COVID-19, delayed action will cause avoidable deaths.”

The new Lancet Countdown report explains that climate change is leading to more favourable conditions for the spread of deadly infectious diseases such as dengue fever, malaria, and vibriosis – putting at risk the decades of progress in tackling these diseases.

By limiting temperature increases to well below 2C, and aligning climate and pandemic recovery, the world can deliver near-term and long-term health benefits, according to the new report. Health gains could in turn deliver many billions in economic benefit, which could more than pay for the costs of mitigation and bolster the case for green stimulus measures.

The 7 million annual deaths from air pollution associated with the combustion of fossil fuels point to the potential. In the WHO Europe region modest steps to promote cleaner energy and transport sectors saw deaths from ambient PM2.5 air pollution fall from 62 per 100,000 in 2015 to 59 per 100,000 in 2018. Globally, deaths from ambient PM2.5 associated with coal fell by 50,000 in the same year. The European Union’s marginal air quality improvements from 2015 to 2018, could be worth an estimated US$8.8bn every year, if held constant. Stemming from the annual average reduction in years of life lost, the figure will grow with further improvements in air quality.

Given that food production is the source of a quarter of the world’s GHG emissions, the report suggests there is a similar opportunity to address some of the 9 million annual deaths linked to poor diet. With livestock being particularly emissions-intensive, the report examined deaths from excess red meat eating. The authors found that mortality has risen 70% over the last 30 years, with the majority of the now almost 1 million annual deaths occurring in the regions of the Western Pacific and Europe.

Dr Maria Neira, director of the Department of Environment, Climate Change and Health at the World Health Organization, said: “With trillions being invested globally in economic support and stimulus there is a genuine opportunity to align the responses to the pandemic and climate change to deliver a triple win – one that improves public health, creates a sustainable economy and protects the environment. But time is short. Failure to tackle these converging crises in tandem will lock in huge amounts of fossil fuels, moving the world’s 1.5C target out of reach and condemning the world to a future of climate-induced health shocks.”