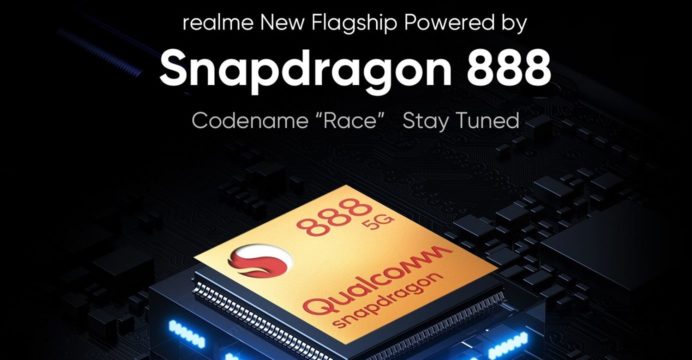 realme has announced its newest phone ‘realme Race’ at the Qualcomm Snapdragon Tech Summit Digital 2020, which will be one of the first smartphones to be powered by Qualcomm® Snapdragon™ 888 5G Mobile Platform. The codename ‘Race’ depicts the fast speed and high performance of this upcoming phone.

‘realme Race’ has been under development for a few months now and as the world’s fastest-growing smartphone brand, realme is once again determined to deliver a product that will exceed the expectations of users around the world. realme has worked closely with Qualcomm Technologies since its inception to bring dozens of high quality, powerful smartphones to the consumers across the world from the 4G era to the 5G era. In 2020, realme was one of the first manufacturers to use Qualcomm Snapdragon 865 and 765G 5G Mobile Platforms. The realme X50 Pro 5G with Snapdragon 865 and realme X50 5G with Snapdragon 765G have been widely recognized by the markets around the world.

The Snapdragon 888 5G, with its powerful performance and top 5G capabilities, has expanded new possibilities for the development of realme’s new flagship ‘Race’, especially in terms of gaming, video and communication capabilities, pushing the user experience to a new level and becoming the powerful engine for realme’s new flagship. It is the next generation AI Engine for flagship smartphones. In contrast to its predecessor the Snapdragon 865, uses a third-generation X60 5G modem and a sixth-generation AI engine with the completely re-engineered Qualcomm Hexagon processor, taking a pivotal leap forward in AI compared to the previous generation. On the road of ‘Dare to Leap’, realme wishes to keep on working with Qualcomm Technologies to exceed expectations and bring astounding performance experience to young users around the world.

Apart from this new update, realme was also heard to be in cooperation with the animation designer of the famous 2013 Animated Comedy, Monsters University on developing a new image. Recently a cat image has been trademarked by EUIPO, which may be used for either customized phone or VR.