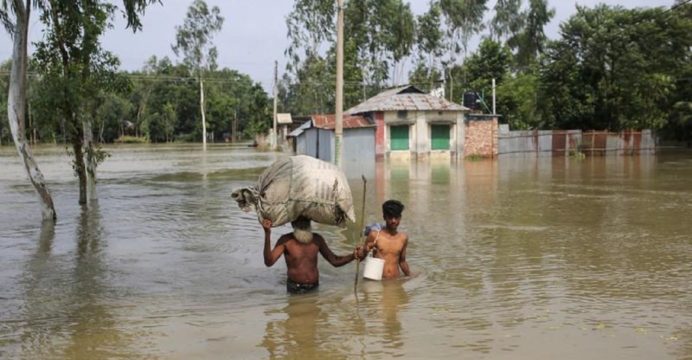 Policy makers and disaster management experts stressed the importance of Disaster Impact Assessment (DIA) tool in planning process to minimize economic losses due to disasters and to ensure maximum benefit of development interventions.

The views were expressed in a national workshop on Disaster Impact Assessment (DIA) in Dhaka, on 29 November 2020, organized by the National Resilience Programme (NRP), implemented by the Programming Division of Planning Commission having technical partnership with UNDP.

Addressing virtually as the chief guest, Planning Minister, M A Mannan said,, “Government of Bangladesh is actively considering the inclusion of DIA in project approval and implementation process” He suggested to make the tools simple and user friendly, so that planning officials can cope with this new tool easily. He also suggested to consider resilience from a broader perspective.

Md. Mosharaf Hossain, Additional Secretary, Planning Division and the chair of the event, underscored the need for institutional arrangement to include the DIA in planning process and the necessary capacity building at all levels. He suggested for implication of DIA in infrastructure sector and its learning can be replicated in other sectors

Md. Mohsin, Secretary of the Ministry of Disaster Management and Relief as the special guest said, feasibility study should include disaster and climate risks and DIA should be included in planning format soon .

Dr. Nurun Nahar, Joint Chief, Programming Division and the NRP Project Director, in her welcome remarks said, “DIA tool was the outcome of the directives given by the Prime Minister in 2016.” She also highlighted the process of DIA formulation since the inception of NRP in 2018.

Among others, Khandker Ahsan Hossain, Chief of the Programming Division and Md. Khurshid Alam, Assistant Resident Representative of UNDP Bangladesh also spoke. Representatives from different Government and Non-Govt agencies, development partners, educational institutions took part in the workshop, including the participants who joined over zoom platform.

The National Resilience Programme (NRP) is a unique partnership between Bangladesh Government and United Nations Development Programme (UNDP), UN Women and United Nations Office for Project Services (UNOPS), that will provide strategic support to develop national capacity to keep pace with the changing nature of disasters, supported by SIDA and FCDO of British Government.