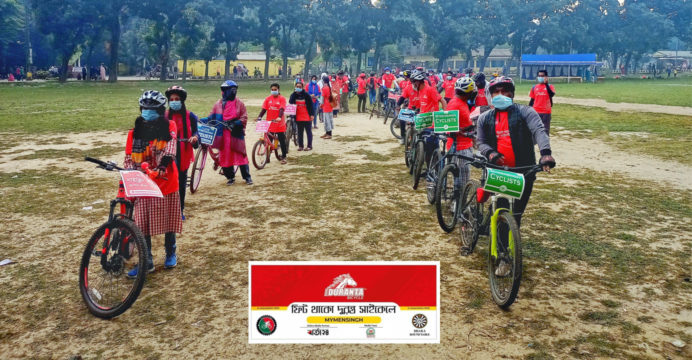 Bicycle rally held in Mymensingh to raise awareness against Corona

Organized by Dhaka Round Table and Mymensingh Cyclists, the Corona Awareness Bicycle Ride titled “Stay Fit on Durant Bicycles” was held on Friday, November 27, 2020, at Mymensingh. The program is sponsored by Duranta Bicycle.

The effort is aimed at encouraging people to use bicycles instead of public transport to combat the coronavirus. Besides, one of the objectives of the rally is to use bicycles and promote bicycle touring as part of a healthy lifestyle.

The event was inaugurated at the traditional Circuit House ground in Mymensingh at 7 am and the ride started at 8 am. The ride was organized with the participation of only 70 cyclists following the hygiene rules to avoid overcrowding in the Corona situation.

The ride goes around the city and ends again at the Circuit House grounds where the end of the ride is announced through a short closing ceremony.

Organizers concluded the ceremony by announcing an upcoming grand Victory rally to celebrate the victory day of Bangladesh on 16th December.

Following today’s rally, another bicycle rally with 50 riders will be organized by Mymensingh’s Muktagachha Upazila with the help of Dhaka Round Table and Muktagachha Cyclists.