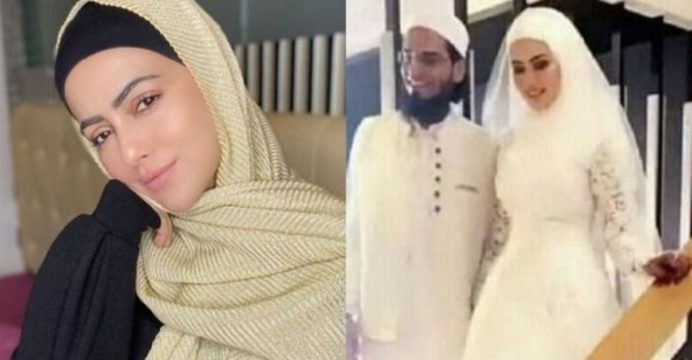 Bigg Boss 6 star Sana Khan, who declared her decision to quit media in October, got married to Mufti Anas in Surat yesterday.

Several videos of the actress have been uploaded online wherein she is wearing a white wedding gown with her husband, who is wearing white traditional costume.

In one video, Sana Khan and Mufti Anas are seen cutting wedding cake in with family members.

Earlier in 2020, Sana Khan broke up with choreographer Melvin Louis. She blamed him for domestic violence and betraying many times. As evidence, Sana Khan shared several Whatsapp screenshots.

In October, Sana Khan declared her exit from media, citing she has resolved to serve mankind.

She had captioned her long note as, “My happiest moment. May Allah help me n guide me in this journey. Aap sab mujhe dua Mai Shamil rakhe.”

She had also shared a series of questions whose answers she had been seeking. A part of her note read, “Isn’t it a part of his/her duty to spend his/her life in the service of those who are needy and helpless? Shouldn’t a person think that he/she could die at any moment? And what will happen to him after he/she is no more? I have been searching for answers to these two questions for a long period of time, especially the second question as to what will happen to me after my death?”