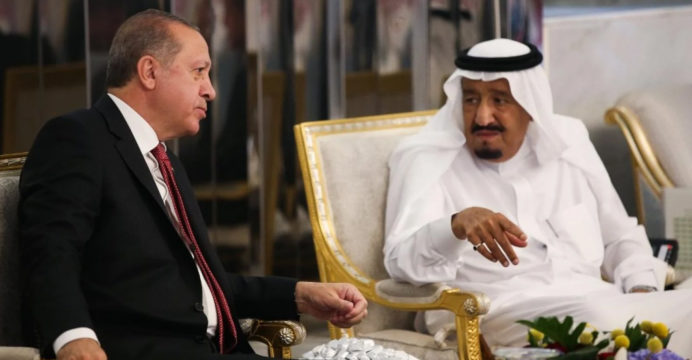 President of Turkey, Recep Tayyip Erdogan addressed ways of enhancing ties with King Salman of Saudi Arabia, in a rare phone call since the killing of journalist Jamal Khashoggi, his office stated.

The phone call came on the eve of the G20 leaders’ summit hosted by Riyadh on Saturday and Sunday.

Erdogan and the Saudi king discussed bilateral relations during the phone call and exchanged views on the G20 summit, the Turkish presidency stated late on Friday. The Turkish leader is due to address the summit via video link at 1300 GMT.

Saudi Arabia and Turkey have long competed for supremacy in the Muslim world but the tensions between the two Sunni-Muslim regional powers have intensified since the 2018 murder of Washington Post contributor Khashoggi at the kingdom’s Istanbul consulate.

The case has sparked an international outcry and tarnished the global reputation of Crown Prince Mohammed bin Salman known as MBS.

Khashoggi was strangled and his body cut into pieces by a 15-man Saudi squad inside the consulate, according to Turkish officials. His remains have not been found.