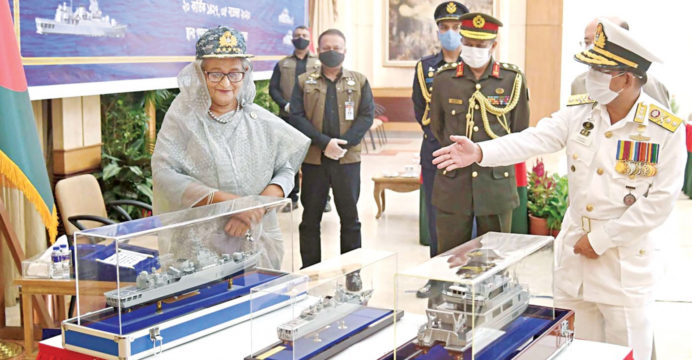 Prime Minister Sheikh Hasina has commissioned five new modern ships, including naval warships. At that time, she said, “Today, the Bangladesh Navy has gone one step further in its continuous progress. The day is very glorious not only for the Bangladesh Navy but for the entire country and nation.”

As a result of this commissioning, two new modern frigates Banauza Omar Farooq, Abu Ubaidah and a Corvette warship Pratasha and two survey ships Banauja were launched and searched.

The Prime Minister commissioned the ships to the Navy through video conference from Ganobhaban this morning.

Earlier, Chief of Naval Staff Admiral M Shaheen Iqbal handed over the commissioning order to the captains of ships on behalf of the Prime Minister at the Banauja Isa Khan Naval Jetty in Chittagong. Later, the Prime Minister officially unveiled the nameplate as per the Navy tradition.

A well-equipped contingent of the Navy also provided a guard of honor at the ceremony.