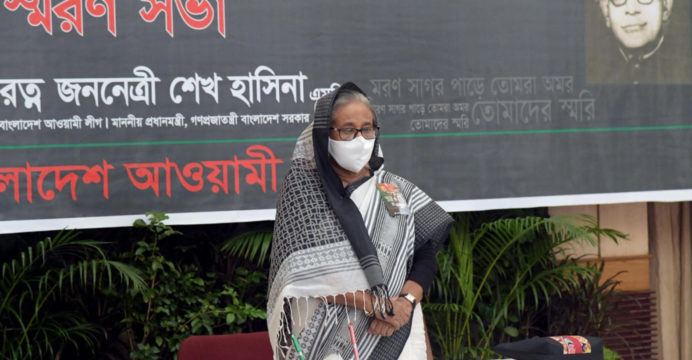 Jail Killing Day is observed with due dignity in Bangladesh

“Jail Killing Day” has been observed all over the country including the capital Dhaka on Tuesday with due dignity.

The people of the country have remembered this one of the most barbaric black chapters in the history of the country by paying due respect to the Four leaders of the liberation war and the nation.

However, in order to prevent the global epidemic of coronavirus infection, a limited number of programs were carried out on the day of the prison killings. The program was attended by the leaders of the Central Executive Parliament of the Awami League, the President-General Secretary of the Dhaka Metropolitan North and South Awami League and the President-General Secretary of the affiliated organizations in compliance with the Health Protection Rules.

Less than three months after the brutal assassination on August 15, one of the heroes of the liberation war and four national leaders Syed Nazrul Islam, Tajuddin Ahmed, AHM Kamruzzaman, and Captain M Mansur Ali were brutally killed inside the central jail on this day.

This day of mourning has been observed all over the country in accordance with the rules of health and at the initiative of various party organizations including Awami League.