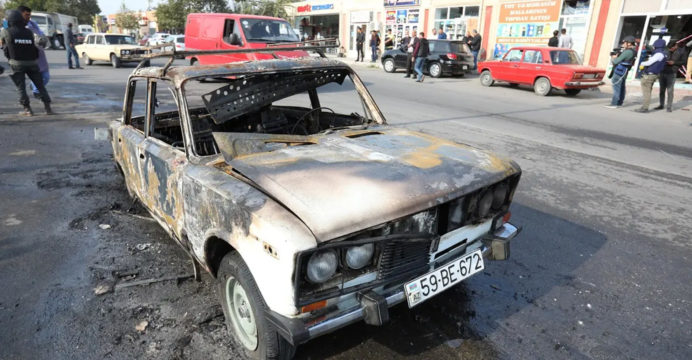 Azerbaijan says no reason for Russia to intervene over Karabakh

Azerbaijani President Ilham Aliyev declared on Sunday there was no reason for Russia to intervene in the dispute over Nagorno-Karabakh because Baku is not threatening Armenian territory.

Fighting has been raging over Karabakh — an ethnic Armenian region of Azerbaijan — for more than a month and on Saturday Armenian Prime Minister Nikol Pashinyan asked Moscow for “urgent consultations” on how Russia could come to its aid under a defense treaty.

Hosting Turkish Foreign Minister Mevlut Cavusoglu in Baku, Aliyev said Pashinyan’s request was an “admission of defeat” and that the treaty did not apply because Karabakh is internationally recognized as part of Azerbaijan.

“Azerbaijan is conducting military operations on its territory and has no military plans for the territory of Armenia,” Aliyev’s office quoted him as saying.

Hundreds of people have been killed since new fighting erupted on September 27 over Karabakh, which broke from Azerbaijan’s control during a war in the 1990s.

International attempts to secure a ceasefire have repeatedly failed.