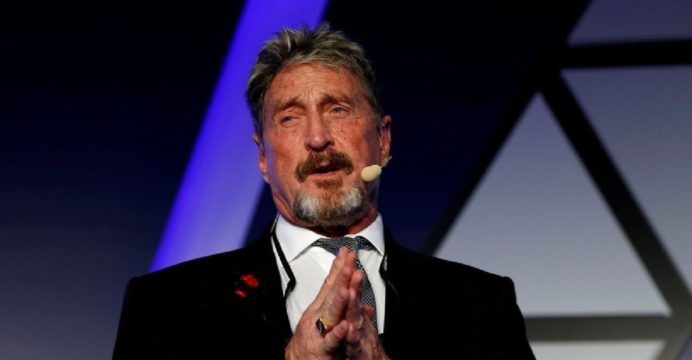 Anti-virus software entrepreneur John McAfee has been arrested in Spain and faces extradition to the US where he has been charged with tax evasion.

Prosecutors say he failed to file tax returns for four years, despite earning millions from consulting work, speaking engagements, crypto-currencies and selling the rights to his life story.

None of the income is connected with the software firm which bears his name. Mr McAfee has not publicly commented on the charges. If convicted, he could face up to 30 years in prison, reports BBC.

In a statement the US Justice Department said Mr McAfee allegedly evaded tax liability by having his income paid into bank accounts and cryptocurrency exchange accounts in the names of nominees. As a result, it is alleged, he failed to file any tax returns from 2014 to 2018.

He is also accused of concealing assets, including a yacht and real estate property, in the names of others.

The government regulator alleges that Mr McAfee made over $23m (£17.7m) by “leveraging his fame” and recommending seven cryptocurrency offerings between 2017 and 2018, which allegedly turned out to be “essentially worthless”, without disclosing that he was paid to do so.

The SEC is seeking to impose a civil penalty on him, and disgorge him of any “allegedly ill-gotten gains”, with interest. It also wants to permanently ban him from serving as an officer or director of any listed company, or any company which files reports to the SEC.

In addition, the SEC has charged Mr McAfee’s bodyguard, Jimmy Watson, with aiding and abetting the sale of digital currencies, along with other allegations.

Neither he nor Mr McAfee have commented publicly on the charges.

Mr McAfee is a controversial figure in the technology sector. He came to prominence in the 1980s when he founded a company that released the first commercial anti-virus software – McAfee VirusScan – and helped spark a multi-billion dollar industry.

Although that business has since been sold to Intel, he still develops cyber-security products of his own.

The entrepreneur, who was born in the UK, also launched unsuccessful bids to become the Libertarian Party’s candidate for the presidential elections in 2016 and 2020.

Mr McAfee has previously expressed his disdain for taxes, tweeting last year that he hadn’t filed tax returns for eight years because “taxation is illegal.”

Last year he was also briefly detained in the Dominican Republic for allegedly bringing weapons into the country.

In 2012, Mr McAfee made headlines after Belize police began investigating the death of his neighbour, Florida businessman Gregory Faull, and named Mr McAfee as a “person of interest”.

Mr McAfee left the country after the death, saying he feared for his own safety, but said he had “no connection whatsoever” with the killing.