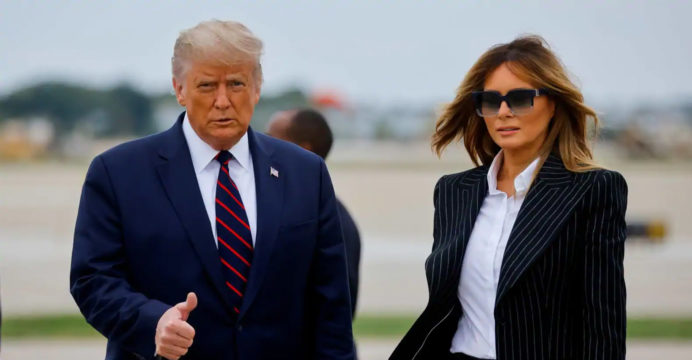 “Tonight, @FLOTUS and I tested positive for COVID-19. We will begin our quarantine and recovery process immediately. We will get through this TOGETHER!” Trump tweeted on Friday.

In a memo issued to journalists around 1 a.m. ET, the President’s physician, Navy Commander Dr. Sean Conley, wrote he received confirmation of the positive tests on Thursday evening.

The President had said late Thursday night that he planned to quarantine after one of his closest aides tested positive for the infection.

Tonight, @FLOTUS and I tested positive for COVID-19. We will begin our quarantine and recovery process immediately. We will get through this TOGETHER!

Hicks was seen disembarking from a plane in Cleveland last Tuesday without a mask. A day later he traveled with Trump to Minnesota.

Trump has not been seen maintaining social distance with officials in various government programs. He did not even wear a mask.

More than 6.2 million people have been infected with the coronavirus in the United States so far, according to AFP. More than 2 lakh have died.