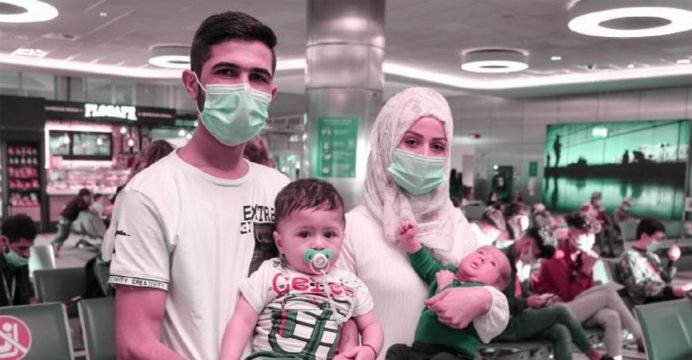 The Government of Greece, together with IOM, the International Organization for Migration, UNHCR, the UN Refugee Agency, and UNICEF, the UN Children’s Fund welcomed the relocation of 139 asylum seekers to Germany, which has brought the total number of people relocated from Greece to other European Union (EU) Member States through a European Commission-funded programme this year to over 1,000.

This was the 16th relocation flight organized under the EU programme implemented by IOM, UNHCR and UNICEF in cooperation with the Government of Greece through the Special Secretary for the Protection of Unaccompanied Children, and in close collaboration with the European Asylum Support Office (EASO).

This year, a total of 1,066 asylum seekers have been relocated from Greece to Belgium, Finland, France, Germany, Ireland, Luxembourg and Portugal.

Among the group that arrived safely in Germany today were families with children with special health needs and 53 unaccompanied children, 37 of whom had been transferred to the Greek mainland after multiple fires completely destroyed the Moria reception and identification center three weeks ago.

“We feel grateful for the people that helped us in Greece and we’ll never forget them. We don’t speak German, but we’ll try hard to learn the language. My brothers live in Germany and I’m excited that I’ll see them again after such a long time,” said Lina Hussein from Syria who travelled today with her husband, Osman, and her sons, Yousef and Mohammad.

Since the tragic fires at Moria, IOM, UNHCR and UNICEF have worked together with the financial support of the European Commission and leadership of the Ministry of Migration and Asylum’s Special Secretary for the Protection of Unaccompanied Children to move 724 unaccompanied children from the islands to the mainland in anticipation of their relocation to other European States. All children have been settled in temporary facilities run by IOM and partners on the mainland where support is provided in line with EU standards.

The relocation initiative, which started last April, has proven to be a workable act of responsibility sharing. The UN agencies are encouraged by the expression of solidarity and action by some Member States to welcome additional asylum seekers and recognized refugees from Greece at a time of heightened hardship.

“This milestone is a remarkable testament that cooperation among partners can change the lives of children and other vulnerable people for the better,” said Ola Henrikson, IOM Regional Director for the EEA, EU and NATO. “Despite the challenges of the Covid-19 pandemic, relocation flights are happening almost every week. We hope this momentum is sustained and expanded, with more European states participating soon.”

“Following many calls for enhanced responsibility-sharing in Europe and the particular need to relocate unaccompanied children and other vulnerable people from Greece, we are very pleased to see this taking concrete shape and gradually expanding”, said Pascale Moreau, UNHCR Director for Europe. “We are grateful to the countries concerned and hope that more countries follow this positive example and demonstrate their solidarity with Greece.”

“The relocations of unaccompanied minors and other vulnerable children continue to be an important part of protecting the rights of refugee and migrant children,” said Afshan Khan, UNICEF Regional Director for Europe and Central Asia, and Special Coordinator for the Refugee and Migrant Response in Europe. “These children, many of whom have fled abject poverty and conflict, have the right to be safe and develop to their full potential.”

Prior to departure and through the provision of updated information, a child’s best interest assessment is supported by UNHCR, EASO, UNICEF and NGO partners to ensure that the relocation is appropriate for these children, with their informed views also considered during the process. At the same time, pre-migration health assessments including COVID 19 testing, are provided in line with the protocols established by Greece and the Member States of Relocation.

As of mid-September, there were almost 4,400 unaccompanied and separated children in Greece in urgent need of durable solutions, including expedited registration, family reunion and relocation. Among them, over 1,000 are exposed to severe risks, including exploitation and violence, and facing homelessness and precarious conditions in urban centres.

The Agencies call for more EU solidarity through relocations following the release of the European Commission’s New Pact on Migration and Asylum, which contains a series of legislative proposals on the EU’s approach to migration and asylum. The release of the Pact provides a unique opportunity for the EU to move beyond one-off relocation exercises and establish more predictable arrangements for relocation within the EU, for longer-term impact.