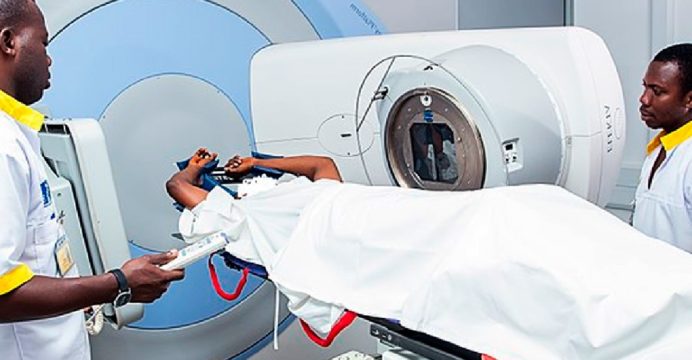 Most men receiving surgery for localised and locally advanced prostate cancer can have radiotherapy safely removed from their initial treatment, according to a systematic review and meta-analysis published in The Lancet.

The authors recommend that patients should be closely followed after surgery for treating localised and locally advanced prostate cancer. If the cancer shows early signs of coming back, men should be offered radiotherapy. They say that changing treatment policy in this way may offer the opportunity to spare many men radiotherapy and its associated side effects.

Dr Claire Vale, who led the systematic review and meta-analysis, from the MRC Clinical Trials Unit at University College London, UK, said: “Our findings suggest that following surgery, patients whose cancer is confined to the prostate, or has spread only to nearby tissues or organs, can safely be spared routine post-operative radiotherapy and its associated side effects. Radiotherapy need only be given to men if they show early signs that the cancer may be returning.”

“Guidelines and policy regarding the standard of care for prostate cancer should be updated based on the findings of this review of the three new trials.”

The authors of the new study identified three trials comparing relevant radiotherapy approaches and prospectively planned a systematic review and meta-analysis to combine their results. The trials include data from France, Australia and New Zealand, and the UK, Canada, Denmark and Ireland, which investigate the optimal timing of radiotherapy after removal of the prostate, which, until now, had remained unclear.

The meta-analysis assessed results from 2,153 men enrolled across the three trials, with median follow-up of at least five years. 1,075 men were randomised to receive adjuvant radiotherapy following surgery, and 1,078 men to early salvage radiotherapy, where treatment is delayed until first signs of disease progression. Only 421 (39%) men had started early salvage radiotherapy at the time of analysis. Patients had a median age of around 65 years, and most (78%) had a Gleason score of 7.

The authors will continue to monitor outcomes from the trials and plan further meta-analyses to compare longer-term effects.

The largest of the three new trials included in the meta-analysis, RADICALS-RT, published in The Lancet, randomly assigned 1,396 men with a median age of 65 to either adjuvant radiotherapy (697 men) or early salvage radiotherapy (699 men). Patients were enrolled in Canada, Denmark, Ireland and the UK, and were followed for an average of 5 years. The authors found that people who underwent adjuvant radiotherapy had more side effects than those who had early salvage radiotherapy, including restricted flow of urine from the bladder (10%, 62/599 patients vs 6%, 35/621 patients) and increased blood in the urine (16%, 94/599 patients vs 4%, 27/621 patients) two years after treatment began.

Study first author Prof Chris Parker, from The Royal Marsden NHS Foundation Trust and Institute of Cancer Research, London, UK said: “The results suggest that radiotherapy is equally effective whether it is given to all men shortly after surgery or given later to those men with recurrent disease. There is a strong case now that observation should be the standard approach after surgery and radiotherapy should only be used if the cancer comes back.”

“The good news is that in future, many men will avoid the side-effects of radiotherapy,” added Parker. “These include urinary leakage and narrowing of the urethra, which can make urination difficult. Both are potential complications after surgery alone, but the risk is increased if radiotherapy is used as well.”

The effect of radiotherapy timing was assessed by recording patients’ first disease event (e.g. a PSA level of at least 2ng/ml) after treatment. While it was not yet possible to determine the long-term effectiveness of adjuvant radiotherapy and early salvage radiotherapy at preventing the spread of the disease, the authors will continue to investigate this.

The conclusions will not apply to all patients having surgery for prostate cancer. Those with very low risk localised disease are not currently considered for radiotherapy, whereas those with the highest chance of prostate cancer spreading would routinely be offered radiotherapy after surgery.

In the future, RADICALS will also report on the effect of giving hormone therapy – which may delay progression – alongside radiotherapy.

The RAVES and GETUG-AFU 17 trials were smaller than RADICALS-RT. Each alone had more limited statistical power. Combined with results from RADICALS-RT in the ARTISTIC meta-analysis, however, they provide strong support for the use of early salvage radiotherapy rather than adjuvant radiotherapy for most men, which could spare many patients from needing radiotherapy. Clinical guidelines have offered conflicting advice as to which patients are offered radiotherapy following surgery.

Writing in a linked Comment, lead authors Derya Tilki and Anthony V D’Amico (who were not involved in any of the four studies), from the Martini-Klinik Prostate Cancer Center and Department of Urology at University Hospital Hamburg-Eppendorf, Germany, and the Dana-Farber/Brigham and Women’s Cancer Center, US, say: “[…] the four studies represent an important step forward and support the use of early salvage as opposed to adjuvant radiotherapy for many patients after radical prostatectomy, with the possible exception of those at high risk for progression (eg, Gleason score 8–10 and pT3b or higher), which comprised less than 20% of men in the three randomised trials, and for whom shared patient and clinician decision making should be considered. Pending longer follow-up of the RADICALS-RT study to evaluate the metastasis-free survival endpoint in high-risk subgroups, we believe it is prudent to consider adjuvant radiotherapy in these patients.”