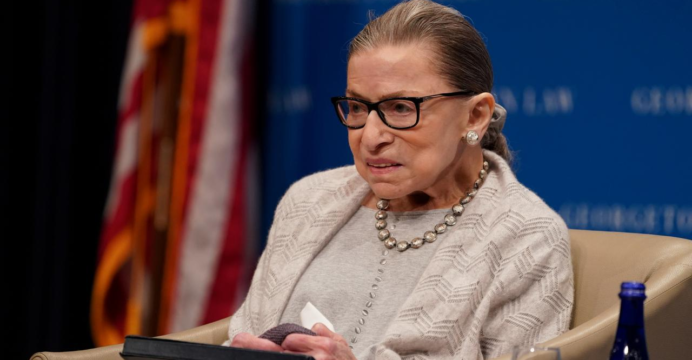 US Supreme Court Justice Ruth Bader Ginsburg, an iconic champion of women’s rights, has passed away of cancer. She was 87, the court has said.

Ginsburg died yesterday of metastatic pancreatic cancer at her home in Washington, DC, surrounded by her family, the statement said.

Earlier in 2020, Ginsburg said she was undergoing chemotherapy for a recurrence of cancer, reports BBC.

A prominent feminist, she became a figurehead for liberals in the US.

Ginsburg was the oldest justice and the second ever woman to sit on the Supreme Court, where she served for 27 years.

“Our Nation has lost a jurist of historic stature,” Chief Justice John Roberts said in a statement on Friday. “We at the Supreme Court have lost a cherished colleague. Today we mourn, but with confidence that future generations will remember Ruth Bader Ginsburg as we knew her – a tireless and resolute champion of justice.”

As one of four liberal justices on the court, her health was watched closely. Ginsburg’s death raises the prospect of Republican US President Donald Trump trying to expand the court’s slender conservative majority, even before this November’s election.

In the days before her death, Ginsburg expressed her strong disapproval of such a move. “My most fervent wish is that I will not be replaced until a new president is installed,” she wrote in a statement to her granddaughter, according to National Public Radio (NPR)..

Mr Trump reacted to Ginsburg’s death after an election rally in Minnesota, saying: “I didn’t know that. She led an amazing life, what else can you say?”

Later on, Mr Trump said Ginsburg was a “titan of the law” and a “brilliant mind”, in a tweeted statement.

Ginsburg had suffered from five bouts of cancer, with the most recent recurrence in early 2020. She had received hospital treatment a number of times in recent years, but returned swiftly to work on each occasion.

In a statement in July, the judge said her treatment for cancer had yielded “positive results”, insisting she would not retire from her role.

“I have often said I would remain a member of the Court as long as I can do the job full steam,” she said. “I remain fully able to do that.”

WHAT IS GINSBURG’S LEGACY?

Over an illustrious legal career spanning six decades, Ginsburg attained unparalleled celebrity status for a jurist in the US, revered by liberals and conservatives alike.

Liberal Americans in particular idolised her for her progressive votes on the most divisive social issues that were referred to the Supreme Court, from abortion rights to same-sex marriages.

Born to Jewish immigrant parents in Brooklyn, New York City, in 1933, Ginsburg studied at Harvard Law School, where she was one of only nine women in a class of about 500 men.

Ginsburg did not receive a single job offer after graduation, despite finishing top of her class. Nevertheless, she persisted, working in various jobs in the legal profession throughout the 1960s and far beyond.

In 1980, Ginsburg was nominated to the United States Court of Appeals for the District of Columbia as part of then-President Jimmy Carter’s efforts to diversify federal courts. Though Ginsburg was often portrayed as a liberal firebrand, her days on the appeals court were marked by moderation.

She was appointed to the Supreme Court by former President Bill Clinton in 1993, becoming only the second of four female justices to be confirmed to the court.

Toward the end of her life, Ginsburg became a national icon. Due in part to her withering dissents, Ginsburg was dubbed the Notorious RBG by her army of fans online – a nod to the late rapper The Notorious BIG.

That comparison introduced Ginsburg to a new generation of young feminists, turning her into a cult figure.