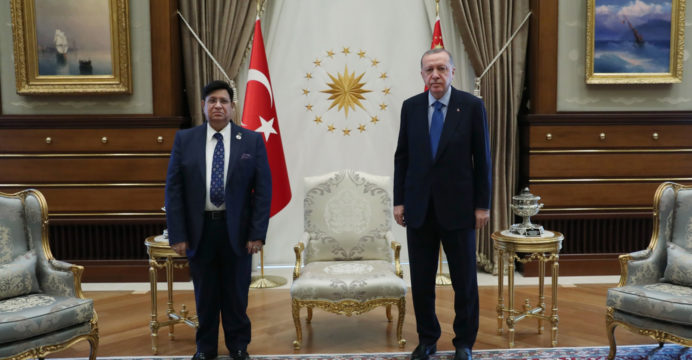 In a meeting with Turkish President Recep Tayyip Erdogan and Foreign Minister Abdul Momen on Wednesday, they expressed commitments to take the relations between the two countries to a new height. Erdogan has agreed to attend the D-7 summit in Dhaka early next year.

Meeting held in a warm and cordial atmosphere, they emphasized the importance of taking new initiatives in the exchange of commercial goods, sending more delegations, and participating in trade fairs and exhibitions. They called the ongoing cooperation in the fields of education, culture and military strength. During the discussion, both expressed satisfaction over the existing friendly relations.

Turkish President Recep Tayyip Erdogan has agreed to attend the D-7 summit in Dhaka early next year. In this context, he emphasized on the expansion of D-8 by adding new member states. He emphasized the importance of enhancing trade relations between the two countries.

This includes investing in new products, textiles, medicines, and other sectors, avoiding existing tariff barriers. He also hoped that the necessary steps would be taken to ensure participation in trade fairs in both countries. The President of Turkey proposed to allocate the necessary land for the construction of a modern hospital in Bangladesh with the financial assistance of Turkey.

The President of Turkey highly praised Prime Minister Sheikh Hasina for providing shelter to the persecuted and distressed Rohingya refugees in Bangladesh. In this regard, he expressed the view that he would stand by Bangladesh in all possible bilateral and international issues. He assured us to send more necessary assistance from Turkey in the current situation of Kovid-19.