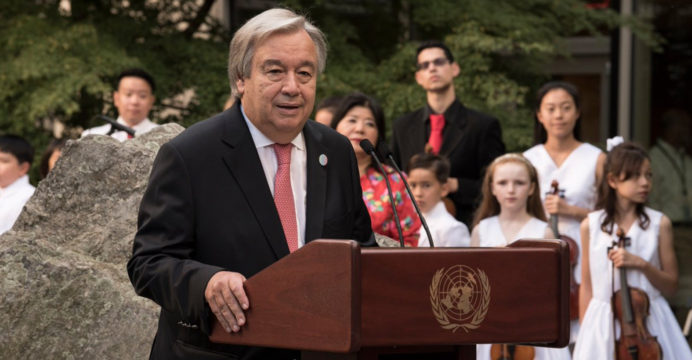 United Nations (UN) Secretary-General Antonio Guterres has cautioned on Thursday that the coronavirus pandemic is increasing risks to peace universally.

“It poses an enormous threat to people caught up in conflict, which is why I made an immediate appeal for a global ceasefire,” the UN chief stated at the UN peace bell ceremony on the moment of the 39th anniversary of the International Day of Peace, which is celebrated around the world every year on September 21.

“I will repeat the call during the General Debate next week. We need to silence the guns and focus on our common enemy: the virus,” stated the secretary-general.

The yearly gathering of world leaders at the UN is proceeding virtually this year for the first time in its 75-year history because of the COVID-19 pandemic. The first day of the General Debate is on Sept. 22.

Noting that peace is never a given, the UN chief stated that “it is an aspiration that is only as strong as our conviction, and only as durable as our hope.”

He asked for attempts to “push for peace wherever conflict is raging and wherever there are diplomatic opportunities to silence the guns.”

The peace bell ceremony was transmitted globally via a live feed, with the UN chief and the new UN General Assembly president, Volkan Bozkir, standing at appropriately distanced podiums, in line with COVID-19 measures.