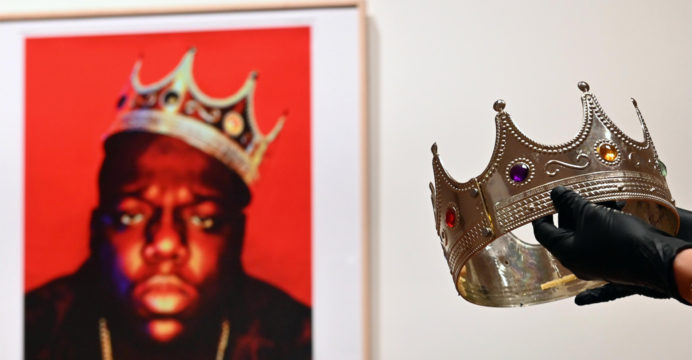 A plastic crown worn by rapper Biggie through a photoshoot just days before his assassination has sold at auction for 594750 USD in New York.

The crown headlined Sotheby’s first-ever sale devoted to hip hop that highlighted more than 120 lots including jewelry, art, and other ephemera of the genre born in the Bronx.

The crown was worn by The Notorious B.I.G. — famous for hits including “Juicy,” “Big Poppa” and “Hypnotize” — through his last recorded photoshoot in 1997, just three days before his shock murder in Los Angeles.

Photographer Barron Claiborne, who took the now immortal image of the artist born Christopher Wallace, put the rap artifact up for auction. It sold for almost double its pre-sale high estimate of $300,000.

It’s quite a sum for a crown made of plastic that Sean “Diddy” Combs, at the time Biggie’s label owner, at first worried would make the hip hop superstar look like the Burger King rather than the King of New York.

A share from the sale will proceed to go to non-profit community organizations, including the music and DJ program Building Beats aimed at engaging underserved youth.