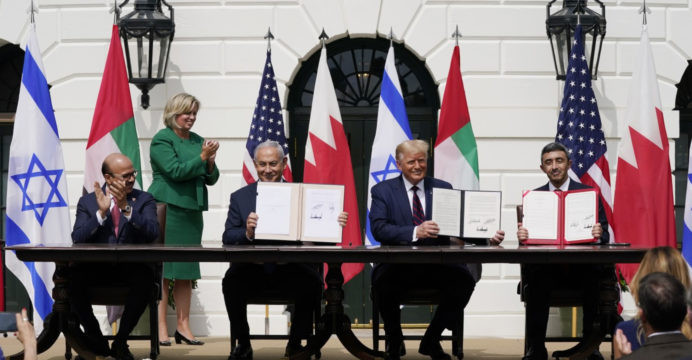 Relations between the two Arab states and Israel have already been declared normal. The signing ceremony was completed at the White House on Tuesday. The United Arab Emirates and Bahrain recognized the Western-backed state of Israel without resolving the Palestinian crisis.

The US president called the historic agreement “the new dawn of the Middle East.” He hopes that more Arab countries will soon follow the path of peace. There are widespread protests in Palestine against the agreement, ignoring rights.

Donald Trump stated that today the world has seen that they have chosen cooperation instead of conflict, friendship instead of enmity. He chose development over poverty and hope over despair. Has embraced a future where Arabs, Israelis, Muslims, Jews, Christians will all live side by side in peace.

After gaining recognition from the two Arab countries, the Israeli Prime Minister did not hold back. And through the agreement, the hope of establishing lasting peace in the Middle East, the Bahrain-Emirate.

Israeli Prime Minister Benjamin Netanyahu said that for thousands of years the Jews have been waiting for peace, praying for peace. And that is why today is a day of unique satisfaction.