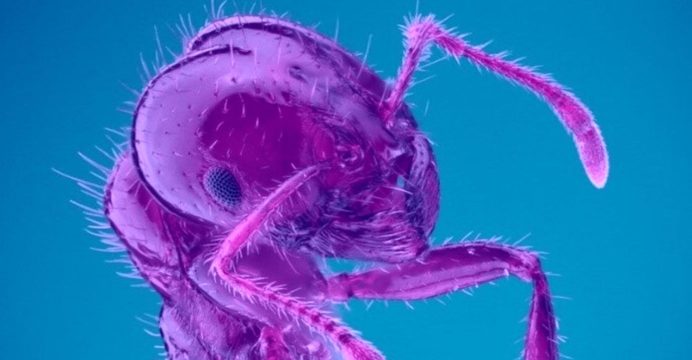 Newly mated queens of the red fire ant choose nest sites with a comparatively low pathogen risk by noting odors made by soil bacteria that slow down the development of ant-infecting fungi, as stated by a study published September 10 in the open-access journal PLOS Pathogens by Daifeng Cheng and Yongyue Lu of South China Agricultural University, and colleagues. As noted by the authors, this is the first time that the chemical signals of soil microorganisms have been reported to impact the nesting choice of newly mated queens.

Soil-dwelling insects are at risk of pathogen infection. When selecting nesting sites, insects could decrease this risk by avoiding contact with pathogens. Yet it has not been clear if social insects can reliably detect and avoid pathogens at potential nesting sites. In the new study, the researchers found that newly mated queens of a soil-dwelling ant — the red fire ant Solenopsis invicta — nest preferentially in soil containing more actinobacteria, which create compounds that slow down the development of pathogenic fungi.

The ants are impacted to two volatile compounds made by these bacteria. Queens in the actinobacteria-rich, pathogen-depleted soil benefit from a higher survival rate, enabling the ant population to grow.

As stated by the authors, the results show for the first time that ants may be attracted to soil based on chemical cues made by resident actinobacteria, which may provide protection against pathogenic fungi. The findings may assist guide strategies that alter the soil microbiota to manage S. invicta, which is notorious invasive pest in many countries, where its fast spread has caused great economic losses and ecological problems.

The authors note, “Queens of the red fire ant apply an interesting way to avoid potential pathogens infection when nesting.”