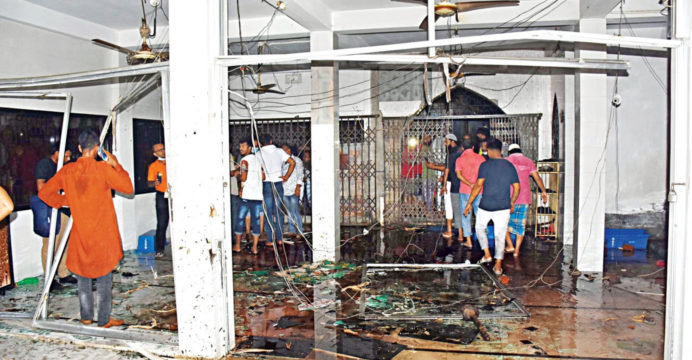 37 burnt worshipers have been admitted to the National Sheikh Hasina Institute of Burn and Plastic Surgery after the AC of Baitus Salam Jame Mosque on the west floor of Narayanganj Sadar exploded. They are being treated in the emergency department. All 37 people were burnt from head to toe more than 40% to 80%. Many of them are 99% burnt.

Fire service officer Zillur Rahman stated the explosion could occur from the Titas gas line under the Baitus Salam Jame Mosque of Narayanganj Sadar. Also not only in the mosque, but those who were near the blast were also burnt.

Earlier, the blast took place at around 9.45 pm on Friday. Speaking to some locals, it is learned that the AC inside the mosque exploded at 9.45 am. Within moments, panic spread among the 30 to 40 people inside the mosque. They tried to get out in a hurry. Many of them were burnt and injured.

Dr Samanta Lal Sen, the coordinator of the Sheikh Hasina National Institute of Burn and Plastic Surgery, confirmed to The media that a seven-year-old young boy named Jewel died after being exposed to fire with 95 percent burns. The 39 injured have been admitted to the institute for treatment, he added.

Most of the patients were admitted to the Sheikh Hasina National Institute with major burns on their bodies, he stated, adding that the condition of many patients is critical.