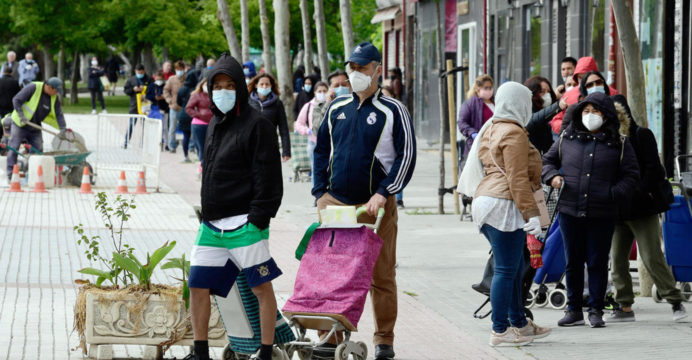 Spain is striving to establish a basic income scheme

Three months later Spain hurried to launch a minimum basic income scheme to confront a spike in poverty due to the COVID-19 pandemic, the program is at a dead-end because of plenty of applications.

The measure was a commitment made by The Spanish PM Pedro Sanchez’s leftwing alliance government, which took office in January, leading together his Socialist party with far-left Podemos as the junior partner.

The scheme was passed in late May, aims to guarantee an income of 462 euros ($546) per month for an adult living alone, while for families, there would be an additional 139 euros per person, whether adult or child, up to a monthly maximum of 1,015 euros per home. It is supposed to cost the state coffers three billion euros ($3.5 billion) a year.

The government determined to bring forward the launch of the program because of the Covid-19 pandemic, which has hit Spain hard and destroyed its economy, causing queues at food banks to swell.

Among the 750,000 applications which were filed since June 15 when the government started accepting requests, 143,000 or 19 percent have been analyzed and 80,000 were approved, according to a social security statement issued on August 20.