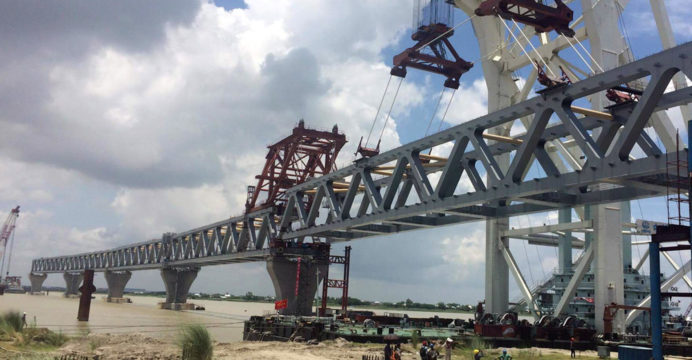 Ferry closed at night for safety of Padma bridge

State Minister for Ministry of Shipping Khalid Mahmud Chowdhury said it has been decided to stop night ferry service on the Shimulia-Kanthalbari route for the safety of the Padma Bridge under construction. He was speaking to reporters after paying homage at the tomb of Father of the Nation Bangabandhu Sheikh Mujibur Rahman in Tungipara on Saturday (August 29th).

Khalid Mahmud Chowdhury said, “The ferry service has been suspended since evening to ensure safety and accidents at the Padma Bridge. The work of the Padma bridge is going on in the excess current in the Padma river. The span is not going to be installed on the Padma bridge due to the current. Also yesterday, a ferry got stuck in a strong current. It is feared that if the ferry service continues at night, there could be a big danger. ”

Earlier, the Shipping Minister paid floral tributes at the tomb of Bangabandhu Sheikh Mujibur Rahman, the father of the Tungipara nation in Gopalganj.