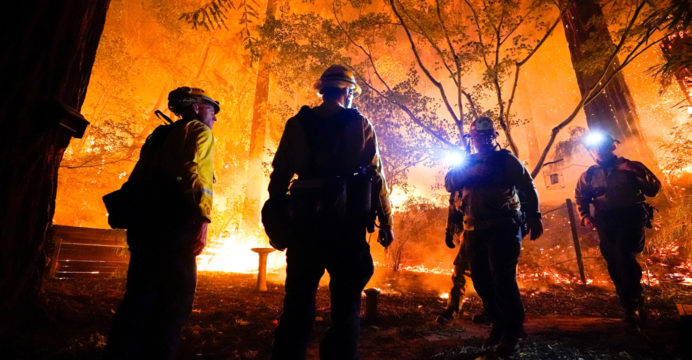 US Firefighters on Sunday battled some of California’s largest-ever fires that have driven tens of thousands of inhabitants from their houses and burned one million acres of land, with further lightning strikes and gusty winds forecast in the days ahead, reports BSS.

Thousands of lightning strikes have hit the state in the past week, igniting fires that left smoke blanketing the region, causing the total area burned to “close to one million acres,” or 400,000 hectares, according to CalFire public information officer Jeremy Rahn.

That is acknowledged as a stunning toll this early in California’s fire season, which usually runs from August to November, and it comes as tired firefighters are already struggling to keep up with the far-flung blazes.

The National Weather Service stated dry thunderstorms could spark extra wildfires, adding that “the western US and Great Plains are shrouded under a vast area of smoke.” It issued red-flag warnings inundating large swaths of northern and central California.

These conditions “could cause erratic winds, extreme fire behavior within the existing fires, and have a potential for new fires to start,” the California Fire department website stated.

Firefighters are pulled so thin that the state has turned down some local officials’ requests for help with equipment or personnel, forcing them to rely on volunteers and local agencies, the Los Angeles Times said.

About 2,600 firefighters are now tackling the two largest blazes, out of roughly 14,000 battling “nearly two dozen major fires,” according to Rahn.

With California asking for external help, several western states, the federal government and even the governments of Canada and Australia have responded for it.