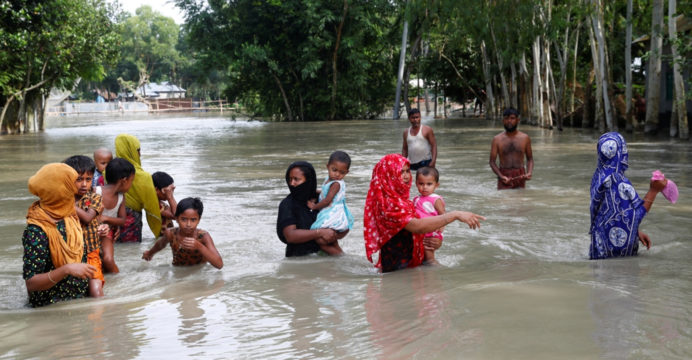 The increasing water level in many of the important rivers in the Ganges basin has been extending again for the second consecutive day today because of the onrushing of floodwater from upstream hilly catchment areas caused by the heavy downpour, reports BSS.

The local office of Bangladesh Water Development Board (BWDB) has reported a rising trend at most of the rivers like Mohananda in Chapainawabganj and Ganges at Pankha in Chapainawabganj, Rajshahi, Hardinge Bridge, Talbaria and Goalunda and other downstream rivers this morning.

The water level in the Ganges River reached up by five centimeters (cm) at Pankha in Chapainawabganj, nine cm at Rajshahi, two cm at Hardinge Bridge and six cm at Talbaria points in the prior 24 hours ending at 9 am today.

A total of 30 river locations monitored in the Ganges basin today, water levels receded at 14 points, while went up at 14 points and remained stable at two points.