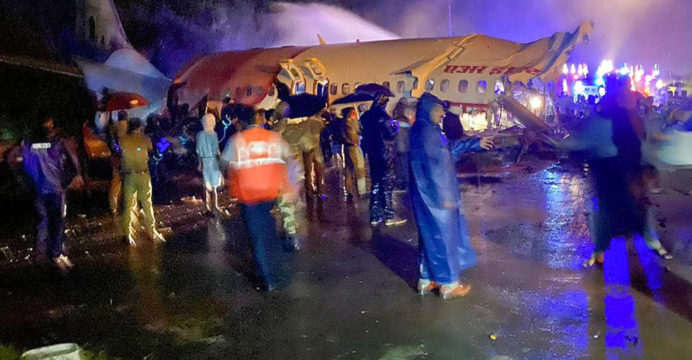 At least 15 people, including two pilots, have been killed in a plane crash in the Indian state of Kerala. Among all passengers, 112 injured have been admitted to various local hospitals. There were a total of 191 passengers on board.

Indian media NDTV reported that the plane was returning from Dubai. The Kerala police chief said, “Rescue work was underway on the plane. Four more people are still trapped inside the plane rubble. Most of the passengers have been rescued already. The condition of 15 of the injured is critical. Both pilots were killed in the crash.”

According to the airport authorities, there were 10 children on board, including 174 adult passengers. The flight also had two pilots and five crew members. It was a Boeing 737 model aircraft.

Relevant sources say that the plane did not catch fire even though it broke into two pieces. The airport has been closed since the incident.

Pained by the plane accident in Kozhikode. My thoughts are with those who lost their loved ones. May the injured recover at the earliest. Spoke to Kerala CM @vijayanpinarayi Ji regarding the situation. Authorities are at the spot, providing all assistance to the affected.

Prime minister of India Mr. Narendra Modi also expressed his grief by twisting, “Pained by the plane accident in Kozhikode. My thoughts are with those who lost their loved ones. May the injured recover at the earliest. Spoke to Kerala CM Pinarayi Vijayan Ji regarding the situation. Authorities are at the spot, providing all assistance to the affected.”

Kerala Chief Minister Pinarayi Bijayan wrote in a tweet that necessary instructions have been given to the concerned officials to take all necessary measures to conduct the rescue operation.