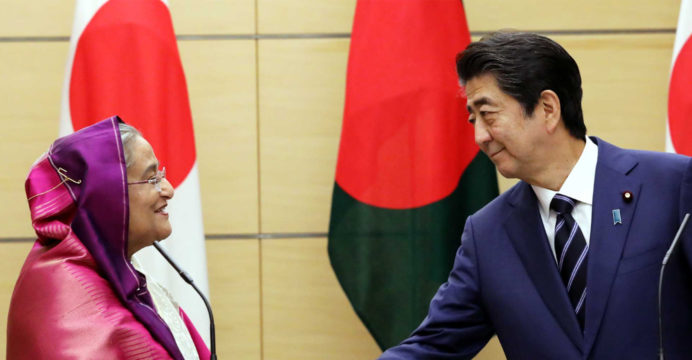 Japan will pay USD 329 million to Bangladesh for fighting coronavirus

Japan will provide USD 329 million as a fund to Bangladesh for fighting coronavirus. The announcement was made by Japanese Prime Minister Shinzo Abe during a telephone conversation with Prime Minister Sheikh Hasina on Wednesday (August 5th).

The press secretary said Shinzo Abe had informed Sheikh Hasina that a bill on aid to Bangladesh had already been approved by the Japanese parliament.

The Prime Ministers of the two countries talked about the COVID-19 epidemic, bilateral economic cooperation, and various projects being implemented with Japanese assistance in a 25-minute phone conversation that started at 1:05 pm.

She also briefed the Prime Minister of Japan on the current Rohingya situation. In response, the Japanese prime minister said he would talk to Myanmar’s leaders about resolving the Rohingya crisis.

Sheikh Hasina thanked the Prime Minister of Japan for providing protection to Bangladesh against PPE, masks, goggles, and the COVID-19 virus.

The Prime Minister of Bangladesh expressed hope that the 2020 Summer Olympics, which had been postponed due to the Kovid-19 epidemic, would be held in Tokyo, Japan in due course.