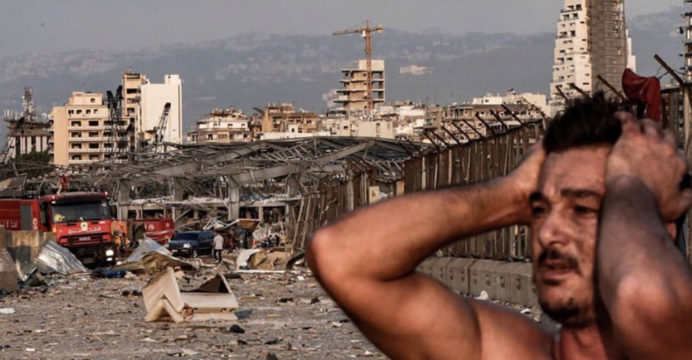 A massive blast in Lebanon ripped through central Beirut on Tuesday, wounding and killing hundreds of people and blowing buildings across the city.

The explosion near the gate in the Lebanese capital sent up a huge mushroom cloud-shaped shockwave, flipping over cars and damaging constructions miles away.

It is not yet obvious what caused the blast in the city’s port region. Video posted online showed a large mushroom cloud and destroyed buildings.

Vehicles were left strewn across the neighboring highway. Witnesses told LBC television that at least dozens were hurt and hospitals were full of wounded people.

#BREAKING – 70+ People have been killed in the MASSIVE explosion in #Beirut, #Lebanon, per Red Cross.

Lebanese Health Minister Hamad Hasan has spoken of many injuries and extensive destruction, and the Lebanese Red Cross announces hundreds of people have been taken to hospital.

A BBC reporter at the scene reported dead bodies and severe damage – enough to put the port out of action.

Reuters news agency quotes sources as saying 10 bodies have been pulled from the wreckage.

The explosion occurs at a tense time in Lebanon. On Friday an UN-backed panel is supposed to issue a decision on the 2005 assassination of former prime minister Rafik Hariri, a move many fear will stoke sectarian tensions. Lebanon is also in the midst of an economic meltdown, with ballooning unemployment, a tanking currency, and poverty rates soaring above 50%.