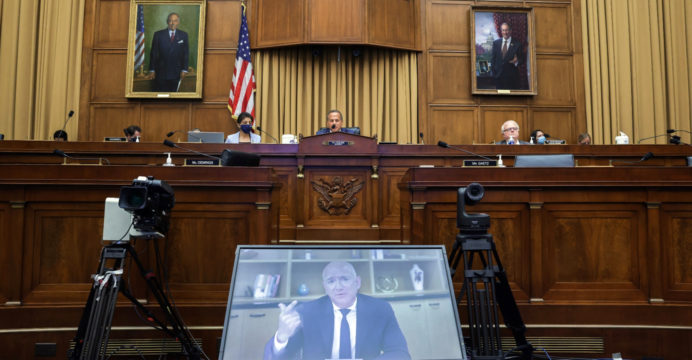 The leaders behind the tech giants like Google, Apple, Amazon, Facebook testified before Congress virtually. They took a brutal political lashing Wednesday as Democrats and Republicans confronted the executives for exercising their market power to smash competitors and accumulate data, customers, and sky-high profits.

Founder, CEO, and president of Amazon, Jeff Bezos stated the world “needs large” firms, while the heads of Facebook, Apple, and Google argued their companies had encouraged innovation.

The presentation comes as lawmakers consider tougher regulation and competition probes are underway.

For the Tech Giants Executives, the issue of their companies’ market dominance arrives at a delicate time — amid an economic disaster that has washed out businesses large and small while adding billions to the coffers of an industry that critics have dubbed Big Tech.

Along with it, the hearing culminates a year-long investigation by the House Judiciary Committee into the foursome, America’s largest companies by market value even before the coronavirus pandemic approached the United States shores in February and sent some of their stock prices skyrocketing.

The four CEOs are testified virtually before the House Judiciary subcommittee on antitrust. Follow along below for updates as it happened.

Democrats pressed the tech giants on competition issues, while Republicans were more concerned about how they handled information and whether they were marginalizing conservative views.

Sundar Pichai of Google, Amazon’s Jeff Bezos, Facebook’s Mark Zuckerberg, and Tim Cook of Apple insisted they had done nothing unlawful and emphasized the American roots and values of their firms.