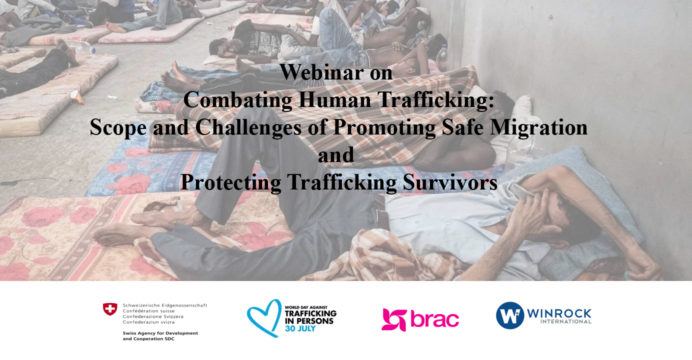 Swiss project Ashshash, implemented by Winrock International, in collaboration with BRAC Migration Program, has conducted a virtual discussion on “Combating Human Trafficking: Scope and Challenges of Promoting Safe Migration and Protecting Trafficking Survivors” on 29 July 2020, as part of observing the World Day against Trafficking in Persons 2020.

Chairman of National Human Rights Commission, Bangladesh, Nasima Begum, NDC, joined in the virtual discussion as the chief guest and mentioned that human trafficking is not only a crime but also a human rights violation of the most serious nature. She also reiterated that the joint effort and collaboration among the government and non-government sector in coordination with ministries, especially Ministry of Home Affairs, Ministry of Foreign Affairs, Ministry of Expatriate Welfare and Overseas Employment, can minimize and combat such heinous crime like human trafficking. She later emphasized the importance of psychosocial and skills development support needed for the people who have escaped trafficking.

In addition, Abu Bakar Siddique, Additional Secretary (Political and ICT), Ministry of Home Affairs as a special guest, said that human trafficking could have been curbed significantly in Bangladesh if trafficking of labor migrants could be stopped. He also mentioned that creating enough employment opportunities and reducing poverty in the country can significantly help reduce the trafficking of labor migrants. Moreover, he expected that investment from the government, as well as the private and non-government sectors, can be an effective initiative to address this issue.

As the guest of honor of the webinar, Muzaffar Ahmed (Ph.D.), Joint Secretary, Monitoring and Enforcement Wing, Ministry of Expatriate Welfare and Overseas Employment, said that people who have limited or no education and skills are mainly the targets of traffickers. As a result, the ministry is emphasizing on skills training as well as has been making considerable efforts to battle against trafficking by several initiatives, i.e. actions against traffickers/travel agencies. 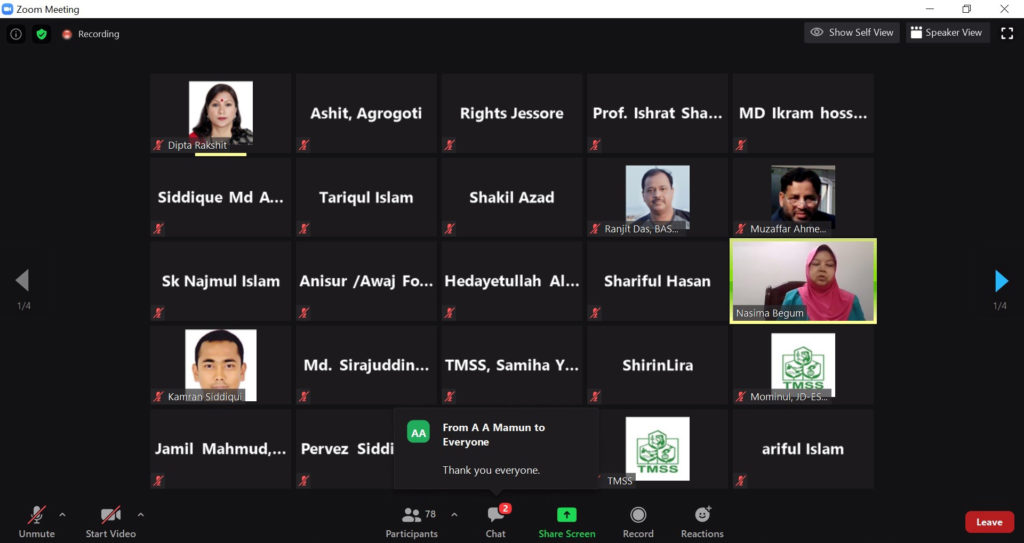 As part of the panelists, A.K.M. Masud Ali, Executive Director, INCIDIN Bangladesh, highlighted the importance of implementing the recommendations of TIP Report-2020 in the context of the National Plan of Action 2018-2022 in Bangladesh. He remarked that the government is putting efforts to cut migration costs. However, he opined that bringing local brokers (Dalal) under the purview of law and under an accountability mechanism is crucial but necessary. Meanwhile, a beneficiary of Ashshash shared her tragic experience of trafficking. Moreover, Tariqul Islam, Country Director, Justice, and Care added that proper case monitoring can boost up the prosecution process of TIP cases. Referring to statistics, Shariful Hasan, Program Head, BRAC Migration Program, talked about the context of human trafficking in Bangladesh mentioning the situations internal, cross-border, labor, and sea route trafficking. He mentioned that one of the core reasons behind human trafficking is poverty which is working as a push factor.

In conclusion, Hedayetullah Al Mamoon, agreeing with all panelists, remarked that the government along with the private sector and civil society organizations can work as a joint force and scale-up solutions to combat trafficking. This age-old crime can be minimized through collective effort.