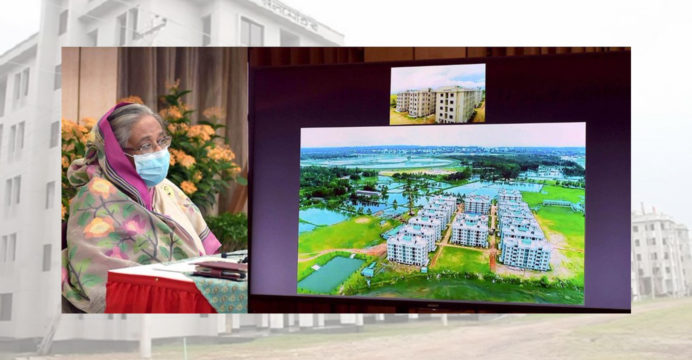 Prime Minister of Bangladesh, Sheikh Hasina today reiterated her steadfast commitment to ensuring housing for all, including the flood and river erosion-hit people, as she inaugurated the world’s biggest rehabilitation project for the climate refugees in Cox’s Bazar, reports BSS.

“We’re celebrating the Mujib Barsho, marking the birth centenary of Father of the Nation Bangabandhu Sheikh Mujibur Rahman. Our aim in his birth centenary is that a single person will not remain homeless. We’ll construct a house, even at least a ‘chala’ (shed), for every person. In any way, we’ll do it and it’s our goal,” Prime Minister Sheikh Hasina told in a function.

The prime minister revealed the landmark ‘Khurushkul Ashrayan Prokalpa’, the country’s largest rehabilitation project, in Khurushkul area on the outskirts of the southeastern beach town of Cox’s Bazar through a videoconference from her official Ganabhaban residence this morning.

Referring to the continuous flood situation in Bangladesh, the premier said her government has all preparations to resist the flood and will make arrangements for building houses and allotment of land for those who will be affected by the flooding and river erosion.

With the inauguration of ‘Khurushkul Ashrayan Prokalpa’, 600 families would get their new shelter in 20 newly built special structures having 32 flats with all modern amenities, Ashrayan’s project director Md Mahbub Hossain said to reporters. 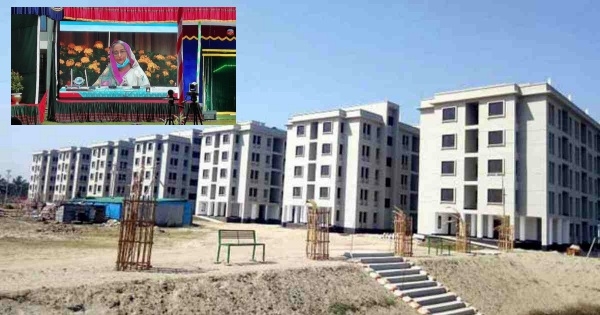 He also maintained each family will get a 456.07 square feet flat in exchange for only Taka 1,001 while all the buildings were equipped with ramp system for people with disabilities, solar panels, safe drinking water, electricity, sanitation, waste management, drainage, cylinder gas, and burner.

Hossain stated under the scheme a total of 4,409 climate refugee families would be rehabilitated at the site as army troops were assigned to construct 139 five-story buildings on 253.59 acres of land at a cost of Taka 1800.39 crore.

The prime minister said the government is making arrangements for rehabilitation of the landless and homeless people across the country. The government has allocated money separately in the budget for constructing houses for homeless people so that a single person does not remain homeless.