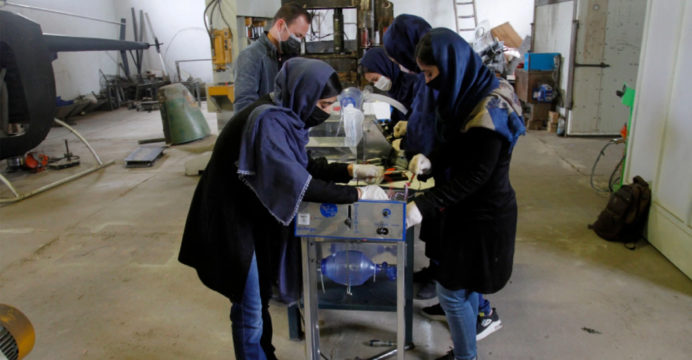 The female students invented an affordable ventilator in Afghanistan

Herat province is located in eastern war-torn Afghanistan. Conflict and various religious restrictions on the survival of the residents there. Modern education is like an illusory object to them. But a group of students from there has created a stir in the world by inventing an astonishing ventilator. Effective in saving lives from the coronavirus epidemic, this ventilator is very affordable and very light in weight.

The team, called “The All Female Afghan Robotics Team”, includes 18-year-old Sumaiya Farooqi and six other young women of her own age. The team has also won several international awards for building robots.

When the coronavirus began to spread in March, they began making low-cost ventilators on an open-source basis. After about four months of tireless work, the entire work of the ventilator was completed. However, to make it, they partially followed the design of the Massachusetts Institute of Technology (MIT) in the United States. They also received guidance from experts at Harvard University.

The ventilator is very easy to carry and will run on battery for 10 hours. It cost is about 700 US dollars to make. In the current market, usually, a ventilator costs more than USD 20,000.

Sumaiya Farooqi said, “Our first step in the medical field has been successful. It will be able to serve the people of the country. We are very happy about this. After months of hard work, we have been able to achieve this. ”

The health authorities are finalizing the use of the device. The officials of the country are full of praise for those students.

Thank you to the all-female robotics team, the Afghan Dreamers, for joining the fight against #COVID19.

Honored to have met these brilliant young women several times and I’m thrilled to see these incredible efforts. #TogetherAparthttps://t.co/pUsw8qXdb9