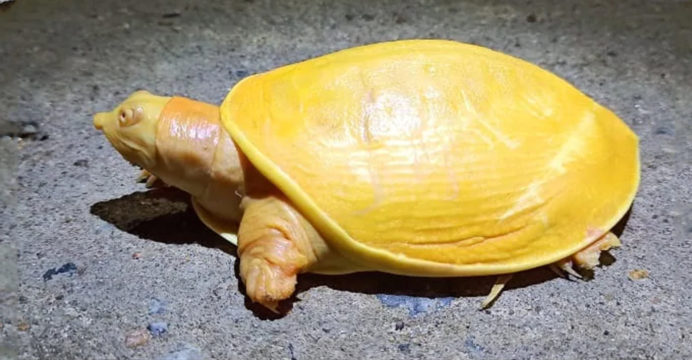 Livestock officials have found a rare species of tortoise in the eastern Indian city of Balasore.

The yellow turtle was rescued by locals from Sujanpur village in Balasore district on Sunday. They called officials of the forest department to the spot and handed over the turtle to them.

.On Sunday (July 19), locals spotted the tortoise and reported it to the forest department, who came to the scene and rescued the animal.

An official from the country’s livestock department said the tortoise’s head and body were yellow. In fact, it is a rare species. I have never seen such a tortoise in my life.

According to the country’s wildlife conservation law, rare species are found to be protected if found. Authorities have decided to preserve it in accordance with the law.

Most probably it was an albino. One such aberration was recorded by locals in Sindh few years back. pic.twitter.com/ZHAN8bVccU

“Most probably it was an albino. One such aberration was recorded by locals in Sindh few years back,” IFS (Indian Forest Services) officer Susanta Nanda wrote on Twitter, sharing a video of the turtle swimming in water inside what appears to be a vessel.