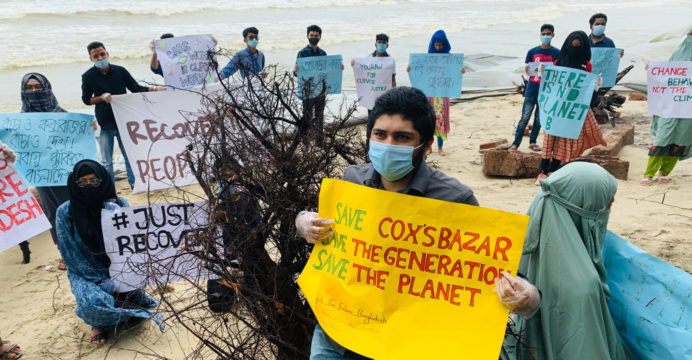 The controversial Matarbari Coal Power Plant which is funded by The Japan International Cooperation Agency (JICA) came under fire from civil society organizations this week for unsafe working practices resulting in the death and serious injury of several workers.

Authorities are maintaining the construction work of the Matarbari coal-based power plant in Cox’s Bazar despite COVID-19 and hazards to 3000 workers. A strike by workers in April demanding a halt to the project due to COVID-19 worries ended when authorities deployed law enforcers to end the strike.

Matarbari is a densely populated island in Cox’s Bazar in Bangladesh home to one hundred thousand people. Bangladesh is already at the mercy of climate change’s rising sea levels and increasingly severe tropical cyclones. In May 2020 Cyclone Ampan caused widespread devastation and forced relocation of 2 million people.

“Cyclones like Amphan are a stark reminder of the dangers that Bangladesh faces. It is frustrating that despite COVID-19 and the climate crisis, the government of Bangladesh is refusing to rise to the occasion and stop coal plant projects. There needs to be an urgent review of power generation plans and a rapid move towards a just and green recovery.” said Sohanur Rahman, an organizer of Fridays for Future Bangladesh.

Communities displaced by the development of the coal plant allege that corruption, malpractice, and violations of human rights have occurred concerning land acquisition and relocation processes. The plant’s development has also contributed to the worsening of floods because of a destruction of water channels for agriculture and water gates, damage of community roads, an increase in traffic accidents, and inflow and accumulation of sediment in surrounding rivers, which has significant adverse impacts on livelihoods of local communities.

Campaigners are calling on JICA to compensate the families of the deceased worker, stop any further work on the project, review funding to overseas coal projects in Bangladesh and stop financing new projects including the proposed Phase 2 of the Matabari coal plant.

“Our condolences go out to the family and friends of the workers affected. It is appalling that the lives of workers are being risked by unsafe working conditions and forcing people to work during a global pandemic” Shibayan, Organiser, 350.org.