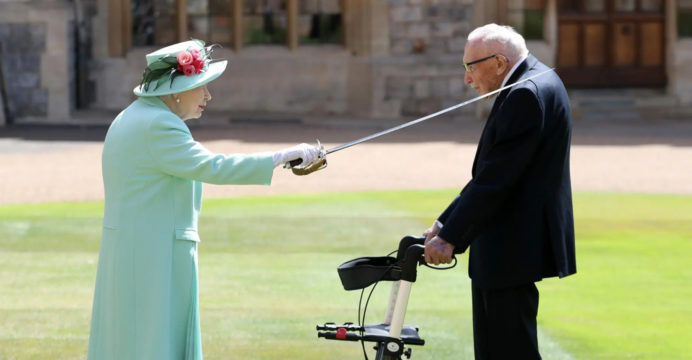 Hundred-year-old Captain Tom walked more than two and a half kilometers before his birthday on April 30 to raise more than thirty-two million, five hundred thousand pounds for UK health workers. For this contribution, he received the title of ‘Knight’ from the Queen. The 94-year-old queen came out for the first time after the lockdown of the epidemic.

A unique event was held at Windsor Castle to honor the 100-year-old, who raised almost 40 million for the NHS charity, BBC Online reports.

Tom Moore, a retired private officer, was a captain in the British Army during World War II. At this age, he thinks of raising funds by walking from the urge to do something for the people. Tom lives in Marston Morettein, Bedfordshire, UK.

On April 6, he planned to walk in the back garden of his house. It may seem effortless! However, walking every day in an 82-foot enclosure is not easy at all for a 99-year-old. Because he has to take the help of a kind of walker for walking. Yet Tom did not hesitate to perform. About thirty-two million, five hundred thousand pounds has been raised from that walk.

In response to the Knighthood power, Sir Tom said, Absolutely outstanding day. I feel extremely honored. It is a great honor to receive from the Queen. It was a privilege to approach and talk to the Queen’s face to face.

The queen also praised, saying, ‘Thank you very much. You have raised a lot of funds. ‘