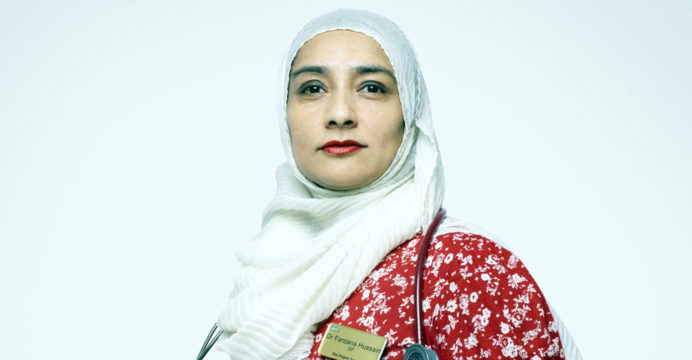 British-Bangladeshi doctor Dr. Farzana Hussain becomes the face of NHS. Dr. Farzana is among 12 Covid-19 frontline workers photographed for a portrait series to mark the anniversary of the UK’s National Health Service (NHS).

Dr Farzana, a British General Practitioner (GP) of Bangladeshi descent photographed for a portrait series on the occasion of the National Health Service (NHS) 72nd anniversary in the United Kingdom.

The photographs for the NHS tribute collection were taken by celebrity photographer Rankin. The British High Commission in Dhaka published a post on its verified Facebook page in this regard.

“Respect Dr. Farzana Hussain, a British-Bangladeshi General Practitioner, who is one of the NHS staff, portrayed on #London billboards to mark the NHS’ birthday, and to honor the vital role that frontline staff has played during the COVID-19 pandemic,” The British High Commission posted in Facebook.

“It’s wonderful to be part of this campaign and to be photographed by Rankin. Now, more than ever it’s important that we not only recognize the vital role primary care has played in fighting this disease [Covid-19] but to also shine a light on the humanity that makes up our GP practices, community services, and hospitals,” Dr. Farzana said to Newham Recorder.

Dr. Farzana Hussain, who works at The Project Surgery in London’s Newham, had won Pulse’s General Practitioner of the Year award at the General Practice Awards 2019 in London.

Dr.Fazana has been praised for her attempts in quality improvement, streamlining appointment processes, and her work with pharmacists.