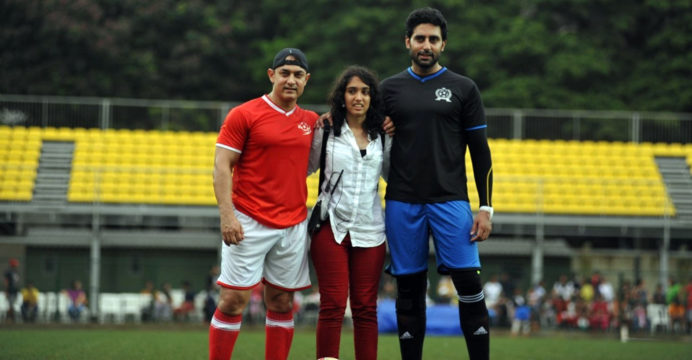 I will not act with Aamir Khan even if I get a chance: Abhishek Bachchan

Aamir Khan is one of the three most influential actors in Bollywood. His presence on the silver screen is less than that of other actors. He works selectively. But whatever Aamir does becomes an epic. That is why he is called Mr. Perfectionist in Bollywood.

Abhishek Bachchan has worked with Aamir Khan in ‘Dhoom Three’. He was fascinated by working in this film with Aamir film. Abhishek recently shared this on his Instagram. He also made a request to Amir, reports Indian media Anandabazar.

Abhishek shared a scene from the shooting of “Dhoom Three’ on Instagram and wrote, “Dhoom gave me the once in a lifetime opportunity to work with Aamir Khan. if given another opportunity I wouldn’t act with him, I want to be directed by him!!! So Aamir, if you’re reading this, kindly consider my request”

#RoadTo20 Year-2013 #Dhoom3 Back in the saddle of the Dhoom franchise. This time directed by Victor an old and dear friend of mine. Victor was the writer of the first 2 Dhooms. He also wrote the dialogues for Guru and Raavan. To be directed by him was… I guess, overdue. My brother @udayc is always a blast to work with. And if that work entails him playing Ali then it’s even more fun. This time the Dhoom boys were joined by @katrinakaif My second film with her. She did her first ever Hindi film with me, Sarkar. Dhoom gave me the once in a lifetime opportunity to work with @_aamirkhan and if given another opportunity I wouldn’t act with him, I want to be directed by him!!! So Aamir, if you’re reading this, kindly consider my request 🙏🏽🙏🏽🙏🏽. Aamir was so warm and forthcoming as a co-actor. Very helpful and accommodating. I can only imagine what a wonderful director he must be. Apart from his great talent he is so down to earth and fun loving on set despite what scene we would do. One of my fondest memories was when we shot a few scenes in Six Flags amusement park in Chicago. The park was shut and it was just the unit that was allowed in. The minute Aamir and I would get the shortest of breaks, we’d run off the the closest roller-coaster and ask them put it on just for us. What a luxury!!! Good times!

No message has yet been received from Aamir regarding Abhishek’s request.

Aamir Khan is regularly praised for his work. A few days ago, actor Ayushman Khurana also admitted that he read the script and chose the film following Aamir’s advice.