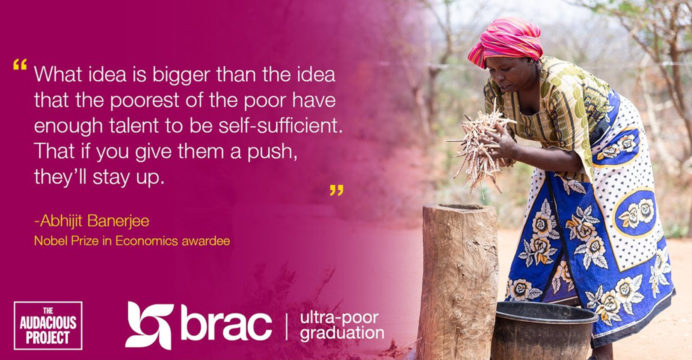 Ultra-Poor Graduation Initiative by BRAC has been named as the 2020 TED Audacious Project to scale The Graduation Approach in Asia and Sub-Saharan Africa and help 21 Million More to escape extreme poverty.

The need to combat extreme poverty and drive systemic transformation has never been more urgent in humans civilization. The impact of COVID-19 has generated a humanitarian crisis of catastrophic proportions putting millions of the world’s poorest at risk of being left behind without resources or support to overcome the shock.

BRAC’s Audacious idea is to scale proven Graduation intervention through government adoption, accelerating the rate of change and lifting 4.6 million households, over 21 million people, out of extreme poverty over the next six years. The solution to reaching millions of more people living in extreme poverty and creating change at the systems level is clear. Governments must take the helm and be equipped to scale up and sustain the Graduation approach.

BRAC’s Ultra-Poor Graduation Initiative provides holistic support, not just financial. To date, the program has helped more than 2 million households lift themselves from extreme poverty. That number will only grow with their The Audacious Project plan.

We’re proud to announce that our Ultra-Poor Graduation Initiative has been named a 2020 @TheAudaciousPrj to scale #TheGraduationApproach in Asia and Sub-Saharan Africa and help #21MillionMore escape extreme poverty. https://t.co/VW3aFxgx6a @TEDTalks pic.twitter.com/0MvarLJc8r

Housed at TED, The Audacious Project is a collaborative funding initiative that is unlocking social impact on a grand scale. Each year they select and nurture a group of big, bold solutions to the world’s most urgent challenges, and with the support of an inspiring group of donors and supporters come together to get them launched.