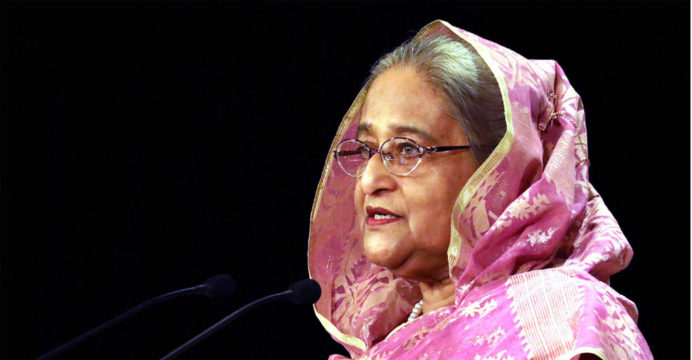 “We need to strengthen the Bangladesh Navy to protect this vast sea area and resources and that is why we have already procured a lot of modern equipment and ships,” she said.

Prime Minister Sheikh Hasina said this while addressing the commissioning ceremony of the newly added warship ‘Banauja Sangram’ in the Bangladesh Navy this morning.

The Prime Minister joined the main event held at BNS Isa Khan, a naval base in Chittagong, by video conference from Ganobhaban.

Referring to Bangabandhu’s foreign policy, the Prime Minister said, “We do not want to fight anyone. We want peace.”

“We want peace. It’s true. If someone attacks us again, we can deal with it properly. We want to build an institution with modern technology to keep pace with the times,” She said.

“That’s why we want every institution, including our army, navy and air force, to be equipped with modern knowledge,” she added.

Referring to the construction of international standard warships in the country at the initiative of her government, Sheikh Hasina said, “We ourselves have now started building, repairing and navigating small-scale naval ships in the country and doing whatever we need together with our friendly country.”

The Prime Minister also mentioned that the name of the newly commissioned warship ‘Sangram’ has been aptly commemorated in honor of the martyrs who sacrificed their lives in the great liberation war and conducted ‘Operation Jackpot’.

“We have achieved independence through struggle and war,” she said. Inshallah, this ship will bring honor to the country in the future. ‘