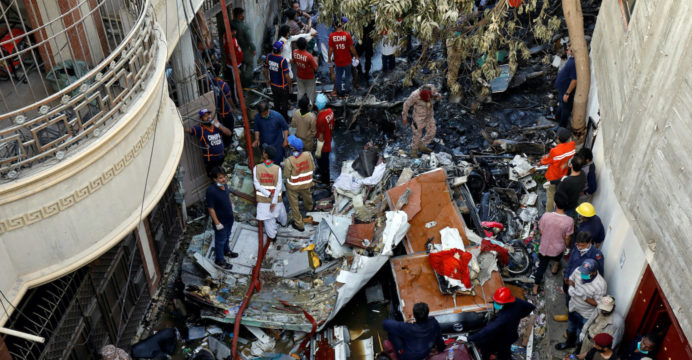 A passenger plane carrying 96 passengers crashed in a residential area of the southern city of Karachi in Pakistan. The accident took place on Friday afternoon. The country’s aviation authorities confirmed.

The photo broadcast on national television, showed a Pakistan International Airlines (PIA) plane crashing into a residential area, with black smoke billowing from the scene. Rescuers and locals are conducting rescue operations in the wreckage, with fire service members trying to put out the blaze.

Prime Minister Imran Khan said in a tweet, “Shocked & saddened by the PIA crash. I am in touch with PIA CEO Arshad Malik, who has left for Karachi & with the rescue & relief teams on the ground as this is the priority right now. The immediate inquiry will be instituted. Prayers & condolences go to families of the deceased.”

PIA chief executive officer Air Marshal Arshad Malik said the pilot of the aircraft contacted the control room and spoke of technical deficiencies. Two runways were ready for the plane to do an emergency landing.

Eyewitness Shakil Ahmed told media that the plane crashed in a residential area a few kilometers away from Jinnah International Airport. Te plane knocks down a mobile tower before crashing. Several houses at the crash site were severely damaged. Besides, 25 to 30 injured residents of the residential area have been taken to hospital.

So far 35 passengers have been confirmed dead. It has been confirmed that 3 people have survived. So far, 13 passengers of the plane have been sent to different hospitals in an unconscious state from the crash site. It will take more time to find out what happened to the fate of others.

The crash happened just days after the planes were allowed to resume commercial flights after landing due to a lockdown of the coronavirus epidemic.